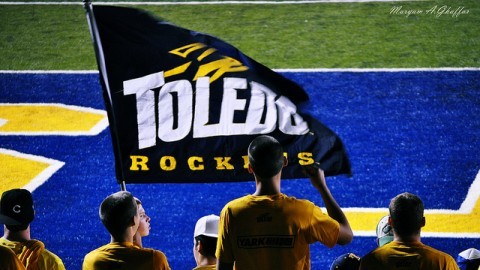 Looking to stake its claim as the top team in the Mid American Conference and stay undefeated on the season, Toledo turned in an impressive performance Saturday afternoon against Kent State, winning 38-7 at the Glass Bowl in Toledo, Ohio.
The Rockets (5-0, 2-0 MAC) are looking good at No. 24 in the Associated Press top 25, but the beginning of Saturday’s win against the Golden Flashes (2-4, 1-1 MAC) was anything but. Diontae Johnson appeared to return the opening kickoff for a score, but the play was called back due to a penalty. Toledo proceeded to punt, and Kent State promptly scored to take a 7-0 lead.
From there, however, it was all Rockets. Toledo stormed back and scored the next 38 points, opening up a commanding lead. Rockets running backs Terry Swanson and Kareem Hunt combined for three touchdowns, while quarterback Phillip Ely went 19 for 32 passing for 205 yards and two touchdowns.
It was a rough day for the Golden Flashes. They generated just 257 total yards, and quarterback George Bollas was 10 for 21 passing with 77 yards and an interception.
Kent State comes to UMass for homecoming weekend on Saturday, while Toledo will look to stay unbeaten when it hosts Eastern Michigan.

Northern Illinois comes out on top in offensive showdown
In a game that saw 100 total points scored, Northern Illinois could not be stopped, as a 28-point second quarter fueled the Huskies to a 59-41 win against Ball State.
Northern Illinois (3-3, 1-1 MAC) did not score in the first quarter, but an offensive explosion followed. The Huskies scored all 59 of their points in the last three quarters, scoring at least 10 points in each period.
The game featured record-setting passing attacks from both offenses. Drew Hare of Northern Illinois set a school record for completion percentage by going 29 of 32 through the air (90.6 percent) and Cardinals’ (2-4, 1-2 MAC) signal caller Riley Neal set a school record for passing yardage by a freshman with 393. Together, they threw for almost 800 yards and six touchdowns against just one interception.
While both teams were effective through the air, it was the Huskies dominant ground attack that proved to be the difference. Led by Joel Bouganon’s 31 carries for 149 yards and two touchdowns, Northern Illinois ran for 276 yards and six touchdowns in the game. Jordan Huff was the primary complement to Bouganon, and carried 10 times for 87 yards and two more scores.
The Cardinals were unable to match the Huskies on the ground, as they rushed 35 times for just 110 yards, an average of 3.14 yards per carry. Ball State plays Georgia State (1-4) at home next week, while Northern Illinois will visit Miami (Ohio).

Western Michigan squeaks by Central Michigan for an in-state rivalry victory, 41-39.
A classic rivalry game had a familiar ending, as Western Michigan slipped past Central Michigan Saturday, the fourth time in five years the Broncos have defeated the Chippewas. Both quarterbacks were prolific, as Zach Terrell of WMU and Cooper Rush of CMU each threw four touchdown passes.
The Broncos (2-3, 1-0 MAC) built a 34-19 lead heading into the fourth quarter, but the Chippewas (2-4, 1-1 MAC) would not go down quietly. They rallied to score three touchdowns in the final frame, but it was too little too late as WMU was able to hang on by a narrow two-point margin.
Broncos’ wide receiver Daniel Braveman finished the game with three touchdown catches, while Chippewas’ wide receiver Ben McCord caught two scores to fuel their respective offenses.
WMU will return to action against Ohio Saturday, while CMU will host Buffalo.