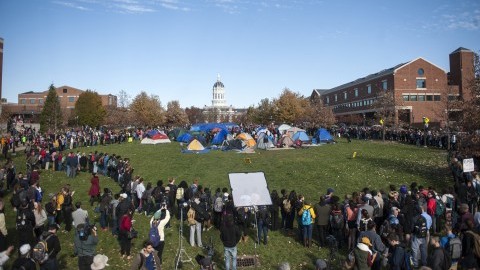 A University of Missouri employee, and former graduate of the University of Massachusetts, forcefully attempted to remove journalists from a campus demonstration Monday, as tempers flared between members of the media and protestors on the Missouri Campus.

Melissa Click, a professor of mass media at Missouri and has a PhD in communications from UMass, is one of two faculty members seen on video attempting to restrict media access at demonstration on the school’s campus following the resignation of system president Tim Wolfe.

Students and faculty held demonstrations  Monday, shortly after Wolfe resigned amid criticism of the school’s lack of response to rising racial tensions on campus. Recently, a Missouri student calling for Wolfe’s resignation staged a hunger strike, while members of the school’s football team refused to participate in team activities until changes were made. Missouri’s chancellor, R. Bowen Loftin, also announced plans to step down Monday.

One such demonstration staged by Concerned Student 1950, a group of students that has led the charge in calling for faculty members such as Wolfe to step down, became tense Monday when students and faculty demanded that members of the media leave a particular space on Missouri’s campus.

In a nearly seven-minute video, students and faculty tell student photographer Tim Tai he does not have the right to photograph them. Tai responds that it’s within his first amendment rights to take photographs in a public setting. Students can be seen raising their arms in an attempt to block Tai’s camera, and another faculty member, Janna Basler, also demands that Tai leave.

At the end of the video, which is being recorded by another member of the media, Click is approached and asked if she can speak. She responds, “No, you need to get out,” to which the reporter says he does not.

Click then grabs his camera and demands he leave again. When he refuses, Click turns to a crowd and asks for help in removing the reporter.

“I need some muscle over here,” she says while pointing at the reporter.

Click has faced significant criticism over her handling of the event, and it has sparked discussion regarding first amendment rights throughout the country.

Tom Warhover, the executive editor of the Columbia Missourian, a university newspaper staffed by students, responded to the video in an interview with the Los Angeles Times.

“I’m pretty incensed about it,” he said. “I find it ironic that particularly faculty members would resort to those kinds of things for no good reason.”

Click had not responded to an interview request at the time of this story’s posting.