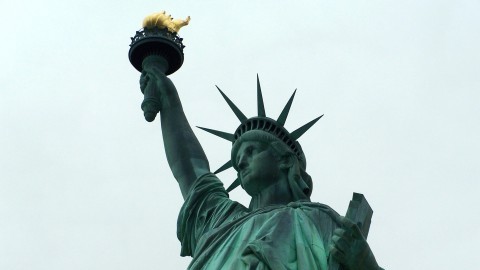 America is divided: some say that we should close our borders to fleeing refugees, others say we should provide safety to as many as we can handle. Some say that it is a moral decision, others that it is a matter of public safety. Bias, fear and hate seem to pervade every discussion, every newscast and every political action. Bombs are dropped, civilians flee and are gunned down by AK-47s. Leaders stand on the world stage and say that more bombs will be dropped, that more civilians will be killed and that the chaos will continue.

Battle lines have been drawn — us against them, them against us, whoever us is, whoever them is. But it isn’t that simple. The political field is completely convoluted. There are no sides. There is no easy conclusion to any debate.

Today, more than ever, the American youth are thrown about in this political storm. As a college student, my opinion is either highly valued or thrown out altogether. I’m either an idealized nut job or a wise young guru. In the midst of this chaos, I find it difficult to keep myself anchored to a moral code. Hate and fear, which rise from confusion, directly challenge my moral decision-making and confront my American identity.

On one hand, we throw open the door of freedom and boast of equal opportunity for all humanity. But, when the tires of ideology hit the rough pavement of reality, that same door is slammed shut to anyone who doesn’t fit the predefined specifications. Unless it affects the homeland, America alienates pain and grows flowers atop the gravesites of foreigners.

In World War II, boatloads of Jewish refugees were turned around because of the inconvenience and fear they brought with them. Native Americans were thrown out of their homes because they stood in the way of freedom. Men and women were shackled and driven to the fields in pursuit of happiness. Do you see the trend? America offers freedom only when it’s convenient.

By example, some in our country shout the slogan ‘All Lives Matter’ in response to the Black Lives Matter movement. But those same voices are silent when the lives of fleeing refugees hang in the balance, because, in this case to say that all lives matter would be inconvenient. Current world events are magnifying the prejudices of the United States; an ideology which goes against everything that I love about America. At times I am ashamed to align myself with the nation that I call home.

Let me stop and acknowledge that it’s easy for me, who is so far geographically removed from the horrors of violence, to cast judgment on world events. I have the luxury to change my Facebook profile picture to the colors of France and to debate whether or not refugees should be able to, on some future date, find safety within our borders. I can argue devoid of sympathy for humanity and base my opinions purely on biased logic, because I’m not forced, daily to confront the refugee crisis like other people are.

Do not think that I have abandoned my belief in the United States as a symbol of freedom and strength, as it’s the contrary. I’m a veteran of Operation Enduring Freedom, I have served my country. I’ve stood in the sand of the Middle East, walked through mosques and listened to hauntingly beautiful prayers that fade into the dusk. I’ve been afraid for my personal safety and I’ve cried as I hugged my loved ones goodbye. I am not ignorant to the dangers posed by those who would destroy me, my family and my way of life.

There is a very real possibility that terrorists will infiltrate our country, and that they could come in posing as refugees. But at the same time, by giving in to our fear and hatred, we might as well not live at all. If we give up on love, they have won already. If we turn away in fear, they have already stolen our American way of life.

Earlier this year I traveled through West Sweden and walked through a refugee camp. I saw families clinging to each other, children running through trains and parents smoking outside in the drizzle.  The refugees are men and women just like you and me. They wake up with the same worries, the same fears and the same uncertainties. All of these experiences have molded my current perspective: we must respond out of love.

We cannot allow confusion to overcome us; we cannot lose our moral footing. The Statue of Liberty stands over New York City with an arm outstretched, welcoming the weak and downtrodden to the safety of our shores. In these dire days, we cannot turn our backs on what this country stands for.