Collin Delia outshines Nic Renyard in net in UMass’ defeat to No. 14 Merrimack 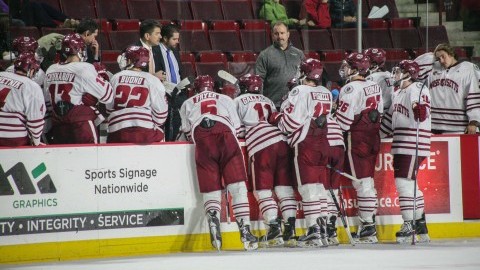 The puck was there for Ray Pigozzi.

But as he was all night, so was Merrimack goaltender Collin Delia.

With about 20 seconds remaining in the game and the Massachusetts hockey team down 3-2 to the No. 14 Warriors (6-1-2, 2-1-2 Hockey East), the junior forward had the ideal opportunity to find the back of the net and send the game into overtime, but a kick save from Delia thwarted Pigozzi’s effort and secured the 4-2 victory over the Minutemen (6-3-1, 2-2-1 HEA), following an empty net goal from Hampus Gustafsson with six seconds remaining.

“I saw him get his toe over it, I didn’t have a completely perfect view, but I saw kind of what was happening and guess he made pretty good save,” Dennehy said, recalling the last moments of the contest.

“We kid around with our goaltenders that they’ve only got to make one save a game, the game-winner, and that happened to be it,” he added.

UMass captain Steven Iacobellis, who recorded two assists on the night, acknowledged Delia’s play in net but also recognized his team’s lack of execution as the Minutemen’s biggest problem in the defeat.

UMass finished with 31 shots, forcing Delia to make 29 saves, eight of which came in the final 20 minutes of the game.

“Personally I had about four or five shots and a couple ones in tight,” Iacobellis said. He was quick, he was really good down low and he’s a really agile goaltender.

For UMass coach John Micheletto, Pigozzi’s last-ditch attempt to tie the game won’t be the only opportunity he remembers from Friday.

“I’ll probably be reminded of four or five,” he said. “I think we had in the second half of the second period probably three looks that a lot of people in the building were already out of their seat on, and then certainly in the third I thought we had opportunities as well.”

Perhaps the best chance for UMass came in the second period when it was trailing 1-0 and received a five-on-three power play.

But despite a five-minute major and game misconduct by Warriors defenseman Matt Cronin and another penalty to defender Aaron Titcomb, the Minutemen couldn’t beat Delia, letting a major opportunity slip away.

Opposite of Delia, UMass goalie Nic Renyard finished with 23 saves, including 10 in the opening 20 minutes that kept Merrimack from pulling too far ahead.

“They only generated two shots from the critical area in the second, but he’s certainly been good for us in the early going here and he continues to give us an opportunity to win,” Micheletto said. “We put him in a bad spot on the third one, it was a tough turnover there at that point in the game, but he’s been very solid.”

Renyard said he knew Merrimack’s style of play would be difficult to handle but feels he grew into the game as it went on.

“Any time you have to battle traffic like they did against me today, I think it helps get into the flow and feel good,” he said.