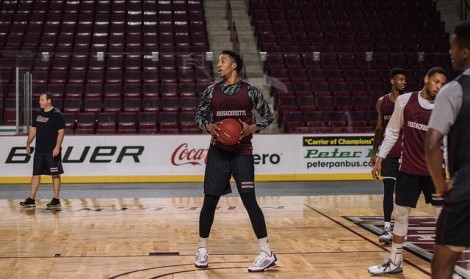 The future is bright for the Massachusetts men’s basketball team, but like everything good in life, it comes with a price.

With a new state-of-the-art training facility next door to the Mullins Center – yes, it’s really that nice – and four highly-touted recruits already committed to UMass for 2016-17, basketball in the Pioneer Valley will be booming for the foreseeable future.

But good things come to those who wait, because the 2015-16 season for the Minutemen is a rebuilding, growing and most importantly a teaching year for coach Derek Kellogg.

Kellogg knows his freshmen big men Rashaan Holloway and Malik Hines are both raw and inexperienced, but he will have no choice but to play them with center Tyler Bergantino’s status with a shin injury up in the air and Antwan Space unexpectedly leaving the team indefinitely to attend to personal issues. Holloway and Hines’ minutes will be higher than initially expected early in the season.

And with Holloway’s weight and conditioning still not at an ideal status, who knows what will happen when he’s forced to play extended minutes in November and December.

I don’t want to take anything away from Holloway’s progress either. He’s worked hard at it and has made substantial improvements on his size and conditioning level, but he still has some work to do if he wants to be the 20 or 30 minutes per game player Kellogg needs him to be down the road.

Oh yeah, Cady Lalanne and Maxie Esho are gone now too. Kellogg will have to get real crafty with his lineups when one of the big men gets into foul trouble. Redshirt sophomores Seth Berger (6-foot-8, 212 pounds) who is more of a traditional small forward and Zach Coleman (6-foot-7, 215-pounds), a stretch power forward, will have no other choice but to play inside throughout the season.

Another main teaching point – and arguably the most important one – for Kellogg is that UMass needs to improve its half-court defense. Last season, the Minutemen struggled to defend at times, allowing 70.5 points per game, which ranked 277th in the country out of 345 teams. Derrick Gordon, their best perimeter defender from last year, is no longer with the team after transferring to Seton Hall.

How is Kellogg going to fix this exactly?

That’s not a UMass problem though. College coaches across the country are aging at an exponential rate, going insane with the lack of defensive fundamentals young players have coming out of high school.

“They don’t play it much in (high school). Most of the guys were the best players in high school or the biggest. Some of the building blocks that were taught 20, 30 years ago they don’t have,” Kellogg said. “But they’re bigger, stronger and they probably have a better basketball game because they’ve played more. It’s just some of the fundamentals that you need to win college basketball games.”

Much of the Minutemen’s success will depend on the growth that Donte Clark makes from year one to year two. He’s the best pure scorer that they have, and after averaging 9.6 points per game he’s going to have to want to be the go-to guy on offense, looking to take big shots when the game is in crunch time.

Seniors Trey Davis and Jabarie Hinds will likely play more minutes together with Hinds being used as the primary point guard, which allows Davis to play off the ball more, opening up more shooting opportunities for UMass. Davis’ 47 3-pointers made topped the Minutemen last year.

Kellogg knows this is a process and that he doesn’t have the magic wand to fix all UMass’ problems instantly. It’s going to be a learning season and the fans need to understand that what happens on the court in 2015-16 will be a minor blip on the radar before the program excels to being the national contender it was two seasons ago when it made a trip to the NCAA tournament.

“There’s a ton of question marks. I’ll be candid, I think we all know that,” Kellogg said.

“But there’s also a lot of answers that are sitting there. Now are you going to come to answer the ball every day to come and play? If we do that, when we do that, we have a chance to be a team that I’m not sure who’s going to want to play us.”