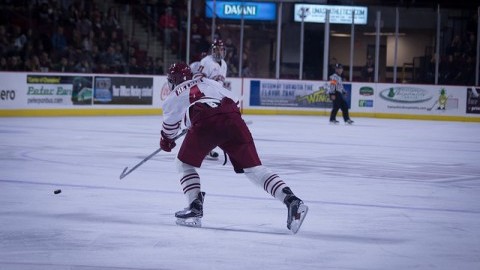 After one of the best starts in recent memory for the Massachusetts hockey team, Tuesday served as a reminder that no game in the Hockey East Association will be handed to it.

No. 3 Boston College played like one of the best teams in the country, and another second period meltdown doomed the Massachusetts hockey team to a 7-0 blowout loss against the Eagles.

Similar to the Minutemen’s 6-1 loss against No. 13 Yale Saturday night, UMass didn’t open the game playing all that poorly, but once the floodgates opened for BC, there was no going back.

Minutemen coach John Micheletto addressed the issue after the game.

“We got away from the things that make us successful for a very short period of time,” Micheletto said. “It’s something that we’ve talked about and need to work on.”

That prompted Micheletto to pull starting goaltender Nic Renyard in favor of backup Alex Wakaluk, although he didn’t think poorly of Renyard’s performance in the game.

“With the exception of the last one, I didn’t have a problem with Nic’s game tonight,” Micheletto said.

That leaves a glaring eye on the defensive play of UMass.

Though the Minutemen landed 26 shots on goal, BC recorded 33 shots on goal as the Eagles benefitted from much better scoring chances. The result was a seven-goal defensive breakdown for UMass.

The 5-0 lead also spurred a brawl with 8:15 remaining in the second period, just 18 seconds after Colin White’s goal had increased the lead to five goals. In total, 49 penalty minutes were assessed, resulting in Minutemen captain Steven Iacobellis and BC forward Ryan Fitzgerald being ejected from the game.

Each team finished with eight total penalties, however UMass lead in penalty minutes with 38, compared to the Eagles 27.

Teddy Doherty added a late goal in the second period and another one in the third to provide the 7-0 final score.

It was another banner night for BC goaltender Thatcher Demko, who posted yet another shutout early in the 2015 season. It was the fourth in five games for Demko, and it improved his record to 6-1 on the season. He’s allowed just six goals against all season, and his save percentage sits at a remarkable .964.

His effort helped to cool a previously hot Minutemen offense for the second game in a row, as UMass has now scored just one goal in their last two games after scoring 26 in their first five.

Tuesday night’s matchup kicked off an important six-game stretch for the Minutemen. They face six Hockey East opponents in a row over the next 18 days, and although it’s early in the conference schedule, every Hockey East game counts the same towards seeding in the postseason tournament. UMass will have a home-and-home next week with Connecticut, before pair of matchups against Merrimack coming between games against New Hampshire and Vermont.

Friday’s series opener against UConn is set for a 7 p.m. puck drop at the XL Center in Hartford.