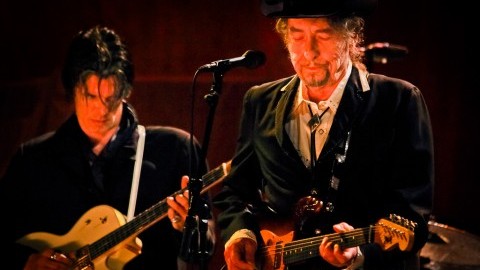 Digging through the seemingly bottomless recorded archives of Bob Dylan can be an imposing task. But, to make that job a bit easier for the uninitiated, and in honor of this week’s release of “The Cutting Edge 1965-1966” – the 12th volume in his one-of-a-kind “Bootleg Series” of rare and unreleased recordings – here are 11 of the greatest treasures from the series’ 11 previous volumes.

“Farewell, Angelina” – Culled from the series’ first release, “Vols. 1-3 (Rare & Unreleased) 1961-1991,” this heart-stopping ballad is one of Dylan’s greatest. Recorded in 1965, this post-mortem of a romance lacks the bitter edge of so many of Dylan’s other breakup songs. Coating his heartache in wondrously surreal language (“see the cross-eyed pirates, they’re perched in the sun/shooting tin cannons with a sawed-off shotgun,” “52 gypsies now file past the guard/in the space where the duce and the ace once ran wild,”) Dylan always returns to the line “farewell Angelina” in each chorus, driving the sentiment into both the heads of both the listener and himself like a mantra.

“Like A Rolling Stone” (Live) – Featured in both the fourth and seventh volumes of the series, this 1966 live performance of “Like A Rolling Stone” may be the single greatest of Dylan’s career. Recorded at the Manchester Free Trade Hall, it is the most famous portrait of the abandonment many folk fans felt when Dylan “went electric” and began writing rock songs. As Dylan tunes up, a fan shouts, “Judas,” to the delight of the assembled hecklers. An incensed Dylan sneers, “I don’t believe you,” before telling his backing group (who would later find fame as The Band) to “play it f***ing loud!” which they more than happily did.

“One Too Many Mornings” (Live) – Also from the fourth volume, and that same, infamous concert, this performance of “One Too Many Mornings” was recorded a few minutes before the more legendary “Judas” incident. Though they hadn’t fully turned on him yet, you can almost feel the crowd’s restlessness and anger through Dylan’s tightly coiled, electric take on this 1963 album cut. You can hear the increasing frustration in Dylan’s sneer throughout the song, as his and the crowd’s bewilderment at one another began to simmer to a boiling part.

“Talkin’ John Birch Paranoid Blues” (Live) – Taken from the sixth volume, a recording of an acoustic performance at New York’s Philharmonic Hall on Halloween night, 1964, this wonderful rarity is still hilariously relevant half a century later. A first-person account of a paranoid member of the extreme right-wing anti-Communist John Birch Society, this song features some of the most biting social commentary of Dylan’s career. The performance as a whole captures Dylan at the peak of his role as the most prominent and articulate political voice of a new generation.

“Dink’s Song” (Demo) – Culled from the series’ seventh volume, the soundtrack to Martin Scorsese’s Dylan documentary, “No Direction Home,” this recording captures Dylan before he became “Bob Dylan.” What Dylan’s early take on the folk staple lacks in beauty it more than makes up for in sheer urgency and impatience. Just one listen shows a burgeoning talent who was desperate to be heard, and destined for far greater things.

“Mr. Tambourine Man” (Alternate Take) – Also from the “No Direction Home” soundtrack, this odd alternate take of one of Dylan’s most iconic, surreal lyrical journeys may permanently shift the listener’s perspective on the song. It’s rare, especially in his early albums, to hear Dylan’s vocals double-tracked. Yet that is how they appear on this outtake, with Dylan uncertainly attempting to harmonize with himself. It is a bizarre experience, but it gives Dylan’s pleas extra weight, as if he has a crowd behind him, always ready to echo his vague sentiments.

“Most Of The Time” – Taken from the series’ eighth volume, which covers 1989-2006 in more detail, this ultra-intimate, acoustic performance puts the version that ended up on Dylan’s 1989 album, “Oh Mercy,” to shame. Dylan spends the track toying with his own self-confidence, proudly detailing his ability to forget a lost love “most of the time.” Though he’s told far grander stories with just his voice and acoustic guitar, this outtake is a perfectly small-scale character study.

“Dreamin’ Of You” – Also culled from the series’ eighth entry, “Tell Tale Signs,” this unreleased cut from the sessions for Dylan’s 1997 comeback, “Time Out of Mind,” is completely from left field. A surprisingly sprightly, funky song, it features Dylan embracing the sort low-key showmanship he has showed in his more recent live performances. Confident and comfortable even in strange clothes, Dylan is more frontman than narrator here, and the results are strangely tantalizing.

“I’ll Keep It With Mine” – Taken from the series’ ninth entry, “The Witmark Demos,” this scratchy demo, recorded in 1964, was written during Dylan’s most productive songwriting period. Though singer/songwriter Nico later recorded the definitive version of the song on her 1967 album, “Chelsea Girl,” Dylan’s piano-and-vocals only take has a hard-scrabble charm to it. Looking back on it now, the fact that Dylan was producing material like this practically daily makes this rarity of the period all the more remarkable.

“If Not For You (Alternate Version)” – A more mournful, countrified take of the bright, spirited opener of Dylan’s 1970 album, “New Morning,” this highlight of the series’ tenth entry is an uncertain one. This tenth entry, “Another Self Portrait,” focuses on the recording sessions of “New Morning” and its immediate predecessor, the famously panned 1970 double album, “Self Portrait.” In these sessions, Dylan seems to be willing to indulge in just about any and all of his infinite creative impulses. Some are baffling, but some, like this particular take, are fascinating.

“I’m Not There” – Originally released on the soundtrack of Todd Hayne’s 2007 film of the same name, “I’m Not There” is one of the most astounding, mysterious songs from the period covered in the series’ eleventh entry, “The Basement Tapes” sessions of 1967. Having completely withdrawn from public life following a serious motorcycle accident in late 1966, Dylan is at his most ghostly on this piece. His trademark sneer is replaced by a more resigned, patient delivery that struggles to be heard. Dylan is clearly in pain here, but wants to keep it to himself.