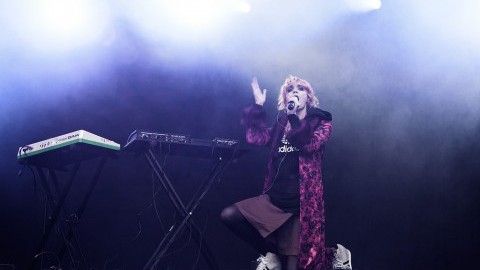 With fan excitement building, the announcement of Grimes’ true fourth album, “Art Angels,” felt like a celebration. At last, we were going to hear the record that Grimes, the stage name of Claire Boucher, wanted to make on a professional audio interface.

The indie-electronic darling first enchanted audiences in the early 2010s with airy vocals and imaginative dream pop singles like “Crystal Ball,” then sealed the deal with her 2012 breakout album “Visions” an indie-pop paradigm masterfully recorded on GarageBand.

She was slated to release her highly-anticipated follow-up to “Visions” in the fall of 2014, but scrapped it due to fan backlash over the EDM-tinged single “Go.” But, if all that buildup has one thinking that “Art Angels” is Boucher’s most left-of-center record yet, think again. While it’s not the full-on pop outing “Go” predicted, “Art Angels” does find Boucher leaning more into such sensibilities, and occasionally finding the power to bend them to her will.

In an interview for “Entertainment Weekly,” Boucher disavowed her past singles, including “Go” and the massively popular “Visions” single, “Oblivion,” saying, “I know that if I don’t like it and everyone else likes it, then it’s probably a single. I always hate the songs that are the singles.”

If that’s the case, I cannot imagine her disdain for lead-off single, “Flesh Without Blood,” easily the most radio-friendly song to ever come from this project. The punky guitars (which actually fill out a great deal of this record) and heavy bass submerge Grimes’ sound into a pop bliss that past singles like “Genesis” only dipped their toes in.

“Butterfly” carves a club-ready beat out of what sounds like a mid-60s workout tape, and “California” even features a Rihanna-esque dancehall rhythm that veers into reggaeton for a brief moment. Pristine melodies abound, and Boucher honestly sounds completely in her element.

Her vocals are also finally unobscured from the reverb-heavy production of past records –  you no longer need to consult a lyric booklet to discern what she’s saying. Boucher has described these lyrics in multiple ways; some are diss tracks, while some are about subjects like objectification. When such lines hit, these strong, sarcastic jabs at nemeses, references to environmental crisis, and even a seething line about artistic selling of inner turmoil (“I get carried away commodifying the pain”) serve as lyrical high points.

More often, however, the results are less inspiring and we end up with lines like, “You come and go, but I love you so” and, “Falling off the edge with you, it was too good to be true.” Maybe there is greater meaning layered in the writing, but the surface words often run either too abstract or overly cliché.

Sections like these juxtaposed against Boucher’s interview persona sometimes cause “Art Angels” to scan like an indie-pop repetition of Lady Gaga’s 2009 album, “The Fame Monster”: a collection of songs that, while undeniably enjoyable, only occasionally reach the level of artistic ambition suggested by the artist (although that comparison is only called to mind by Boucher’s Marie Antoinette-meets-Effie Trinket outfit in the “Flesh Without Blood” video.) Worse still, when “Art Angels” recalls concepts of her earlier work, they occasionally veer towards the less memorable ones, like a meandering synth line or underwritten, sub-two minute non-songs.

Fortunately, there are also plenty of moments where the expanded palette of “Art Angels” surpasses the expectations of “Visions.: “Kill V. Maim” reimagines the sonics of the latter album’s “Circumambient” as blown up to exhilarating amplitudes, with each section of its sprawling chorus giving way to a hook stronger than the one that preceded it.

Futuristic campfire jam “Belly of the Beat” offers a softer side of Grimes that had previously only been hinted at on Bleachers-helmed single “Entropy.” Meanwhile, the expanded version of “Realiti,” which appeared as a demo earlier this year, chugs confidently over stammering percussion and blaring pentatonic chords, building on a repeated chord progression in a song structure similar to early single “Vanessa.”

The features here also run well beyond the mere production guests of  “Visions,” and the album benefits from it. Taiwanese rapper Aristophanes runs wild on the military-march of “SCREAM,” buttressed by Boucher’s guttural screams. The brilliant, Janelle Monaé-featuring “Venus Fly” features punchy percussion freakouts and violin solos underscored by synth chords that recall early Britney Spears. It’s that kind of gleeful pop cultural mishmash that offers a refreshing glimpse of what the sound of “Visions” would have been in a more fleshed out context.

Boucher’s pop-savviness has been evident for a while now (“Go” was originally pitched to Rihanna), but her persona has always suggested that she was avoiding directly embracing the genre like a plague. “Art Angels” isn’t that inevitable embrace, and it isn’t without its transitional growing pains, but it’s a testament to Boucher’s versatility as a singer and producer, and a potent message for music in 2015: Every space has angels.

Will Doolittle can be reached at [email protected]