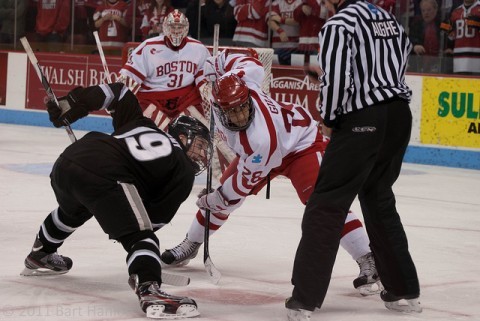 It was a long weekend for the University of Maine hockey team, as it ran into red-hot UMass Lowell and was swept by the No. 5 River Hawks in a home-and-home series on Friday and Sunday.

Friday’s game, which was hosted by UMass Lowell (8-1-2, 4-0-2 Hockey East), was the more competitive of the two games as the Black Bears seemed determined to pull off the upset on the road with resilient defensive play.

The game was scoreless going into the third period, but the drought was broken by River Hawks sophomore defenseman Michael Kapla at nine minutes, 35 seconds of the period. An empty net goal by C.J. Smith sealed the deal with 61 seconds left to play and a late Black Bears power play goal was too little, too late as UMass Lowell held on 2-1.

The setting shifted to Orono, Maine for the second game, but Maine was far from comfortable at home. UMass Lowell scored just one minute, 47 seconds into the game and never looked back as the River Hawks won 6-0. UMass Lowell goaltender Kevin Boyle had a career night with 39 saves in the win, and the River Hawks improved to 3-1-1 on the road this year.

Although UMass Lowell has looked good on both sides of the ice, its identity this season has been on the defensive side, specifically in net. Boyle came through with another strong weekend against the Black Bears, tallying 66 saves over the two games and only allowing one goal.

Maine (0-8-3, 0-4 HEA), on the other hand, has been struggling mightily this season and has yet to record its first win. The Black Bears are averaging just over one goal per game, and their lack of scoring ability showed against a stout goaltender in Boyle.

The River Hawks will return to action next Friday against a tough Notre Dame team while Maine will host Vermont for a pair of games.

After a memorable national championship game last spring that saw Providence capture its first championship at TD Garden in Boston, the No. 1 Friars tied Boston University 3-3 in a rematch between the Hockey East giants and national finalists.

In Saturday’s game at Agganis Arena, the Friars (6-0-3, 0-0-2 HEA) took the lead late in the first period as Brian Pinho put Providence ahead at 17:13 into the period.

What followed was a game defined by aggressive play that led to power play chances for each team. The Friars scored a power play goal courtesy of Jake Walman at 12:36 of the second period, and the Terriers trailed 2-0 entering the third.

But No. 11 BU (5-3-2, 3-2-2 HEA) countered with three unanswered goals in a span of just over five minutes to quickly gain a 3-2 advantage. Ahti Oksanen put the Terriers on the board with a power play goal at 7:12 of the third, and two tallies from freshman Jakob Forsbacka-Karlsson put the Terriers ahead (with one of them coming on the power play again).

As it did in the national championship game, however, Providence regrouped to tie the game 3-3, as Walman scored his ninth goal of the season to even the contest. Neither team could break through for a game-winner and after a scoreless overtime, the result was a 3-3 draw.

The Terriers and Friars also skated to a draw Friday night in Providence, as Oksanen scored with under two minutes remaining to tie the game 1-1. Mark Jankowski scored the lone goal for Providence.

The Friars will return to action with a home-and-home against Northeastern this weekend, while BU will host Michigan for a pair at Agganis Arena.

Matt Lieberman can be reached at [email protected]