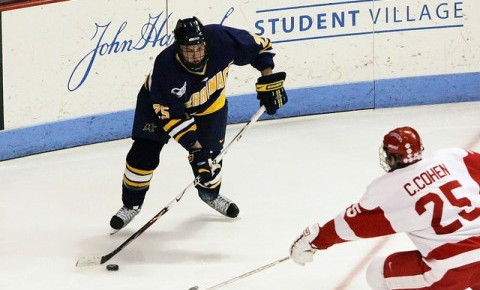 No 17. Merrimack took on last year’s Hockey East champions in No. 8 Boston University, and the Warriors won 4-3 in a back-and-forth affair Friday night at Lawler Rink in North Andover.

Merrimack (3-1-2, 1-1-2 Hockey East) jumped out to an immediate two-goal lead off of contributions from sophomore Brett Seney and senior Ben Bahe. Seney struck first just 48 seconds in on a strong wrist shot. Bahe, who led all Warriors that night with a career-high three points, tapped in a rebound with 10 minutes, 34 seconds remaining in the first.

The Terriers struck back within a four-minute span in the second period. Sophomore John Macleod scored on a wrist shot from just inside the blue line to finally put BU on the board. The tying goal came from senior Matt Lane, who carried the puck into the crease and put home a strong backhander to even the game at 2-2.

In a relentless scoring sequence later in the second, a stolen puck by junior Hampus Gustafsson set up a two-on-one with Bahe, and the play ended with Gustafsson finishing what he started as Merrimack regained a 3-2 lead. Nearly a minute later, freshman Ethan Spaxman found the net on a slap-shot from the point for the rookie’s first collegiate point.

Only four minutes into the third the Terriers pulled within one on a long rebound put-back by sophomore Brandon Hickey. It was as close as BU would come for the rest of the game.

Merrimack will return to action Saturday at Canisius in Buffalo, New York. Boston University will return home for a Friday matchup against Northeastern.

In front of 5,190 at Hartford’s XL Center, Notre Dame senior Sam Herr scored the go-ahead goal at 12 minutes, 36 seconds of the third period, and it held up as the game winner as the Fighting Irish held off Connecticut Friday night in a 2-1 victory.

A scoreless first period left both teams anxious to get on the board as the second period started, and a late first period penalty left the Huskies (3-4, 1-3 HEA) shorthanded to start the second. Just 16 seconds into the period, Notre Dame (3-1-2, 2-0-0 HEA) took a 1-0 lead on a goal from sophomore Jordan Gross off the rush.

At five minutes, five seconds UConn pulled even on a goal from freshman Miles Gendron as the Huskies took advantage of an extra skater from a delayed penalty. The goal was assisted by senior Shawn Pauly and Gendron crashed the net to put one past sophomore goaltender Cal Peterson.

The Huskies got into some penalty trouble at the end of the second period, killing off a five-minute major along with a five-on-three advantage for Notre Dame. The five-minute major stemmed from sophomore Derek Pratt who was called for kneeing at center ice.

But goaltender Rob Nichols made several big stops to keep the game even at 1-1.

After Herr gave the Fighting Irish a late lead, UConn followed with a power play opportunity at 14:43 of the third, but the Huskies couldn’t beat Peterson to tie the game.

UConn will face UMass Friday at the XL Center, while Notre Dame will take on Minnesota this weekend in a two-game series.

Mollie Walker can be reached at [email protected]