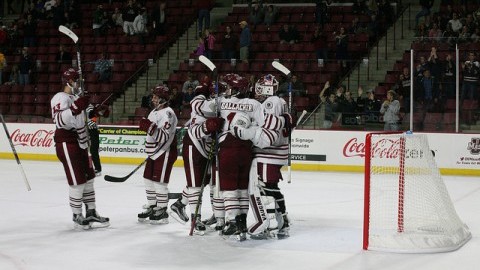 After his team’s 5-2 win versus Sacred Heart on Oct. 16, Massachusetts hockey coach John Micheletto said in his postgame press conference that the “big boy league begins in January.”

But for Micheletto and the rest of the UMass squad, the second major test of the season will be Tuesday night when they travel to Chestnut Hill to take on No. 3 Boston College.

It’s the first of a seven-game stretch in which the Minutemen will face off against the Eagles (5-1), Connecticut, No. 16 Merrimack, Vermont and New Hampshire.

Yes, you can say UMass has shown some flashes of brilliance – the comeback against UNH, for starters – so far this season, most notably from the offensive standpoint. The Minutemen have the second-highest scoring offense in the league, and has been the most successful Hockey East team on the power play.

But we have also seen UMass struggle at times, including a 6-1 loss Saturday night against then-No. 13 Yale, its first defeat of the year. They are tied with the Huskies for most goals allowed with 24, and are lowest in the conference in penalty killing with a 32 percent conversion rate against.

It can be argued that the Minutemen’s loss against the Bulldogs has a lot to do with scheduling after playing an overtime thriller against Maine the day before. But it could also be said that UMass just wasn’t good enough to compete with a top team like Yale.

That is why I believe these next seven games will show us a lot about what type of team the Minutemen are.

Tuesday night, UMass will go up against one of the top teams in the country, and will have to find a way to crack goaltender Thatcher Demko, who has a shutout in three of BC’s last four games and has only allowed an average of one goal per game.

This weekend, the Minutemen will take on UConn and freshman sensation Max Letunov, who was a second round pick in the 2014 NHL Entry draft by the St. Louis Blues and leads the conference in scoring by a freshman (UMass’ Austin Plevy is second).

The 4-1-1 record is obviously a major positive, and prior to the loss, UMass was off to its best start in program history. But two of those wins came against a 0-7 Colorado College team and another against Maine, which has also yet to win a game this year.

With that said, I still think the Minutemen are deserving of the praise they are receiving so far this season, most notably receiving 36 votes in the most recent USCHO.com poll. Their offense has shown they can find the back of the net, and with a young defense, there is expected to be some bumps and bruises as they continue to become a stronger unit. In net, Nic Renyard looks like he is capable of playing as well as advertised, and I would not be a bit surprised if Micheletto decides to go with the freshman over Henry Dill more often as the season wears on.

So yes, the “big boy league” does take place in January, but for UMass, it starts tomorrow in Chestnut Hill.