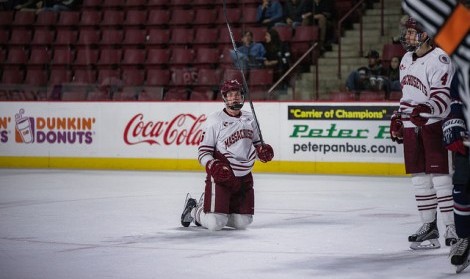 When the Massachusetts hockey team went up 2-0 inside the first two minutes of the first period against Connecticut last Saturday, my focus wasn’t on the game.

Instead, it was on the crowd.

I found myself looking around at the 3,840 fans of the Minutemen that had erupted, something the Mullins Center crowd has not been able to do over the past two or three years.

Sure, it wasn’t at the same level as it was during the 2012 contest against Boston College in which 7,678 fans flocked to the Mullins Center. It wasn’t even at the level of last year’s matchup against the Eagles when 5,939 had shown up to watch yet another defeat.

But something was different about this past weekend.

It was one of the rare times in the two years that I’ve been covering this team that the student section seemed to be into the game from start to finish, chanting at the opposing goalie and going crazy when UMass (6-2-1, 2-1-1 Hockey East) lit the lamp.

It wasn’t by any means a “packed house” but it was a start. Just seeing the students pile into their seats before the game began was enough to realize there is cause for optimism that crowd sizes will continue to increase with the way the Minutemen have started the season.

Still, I found myself thinking the same thing as when UMass stormed back from five goals down to tie New Hampshire 6-6 on Oct. 23: “How much louder would it be in here if there were more people?”

Which brings us to this Friday night, when the Minutemen host No. 14 Merrimack in a conference showdown.

It could be me being naïve, but two days from now, the Mullins Center should be filled, or at least have more than 3,840 people watching.

Combine UMass’ hot start with the fact that it’s a conference matchup against a ranked opponent and there is no reason that students shouldn’t come out to support a team that deserves it.

Plus, don’t students want to come out and see the debut of the brand new hockey band? Credit to both athletic director Ryan Bamford and associate athletic director Alan Pandiani for bringing this idea to fruition, as it should be a welcome addition to the Mullins Center. I had the chance to speak with Steven Iacobellis and Shane Walsh, as well as coach John Micheletto after Monday’s practice, and all three were enthusiastic when asked about being able to play in front of the band for the first time.

This past Monday, I woke up to a message on my phone from a friend that read, “A bunch of us want to go to the hockey game Friday wanna come with us?”

I hadn’t gotten one of those texts since Johnny Gaudreau was in town, so receiving that message made me think of what Walsh had said.

The hockey team has something special going on this year, and people are beginning to notice.

So if you’re a student who always laments the lack of school spirit on this campus – myself included – spread the word to pack the Mullins Center Friday night.