Letter: RAs and PMs deserve same due process as any employee 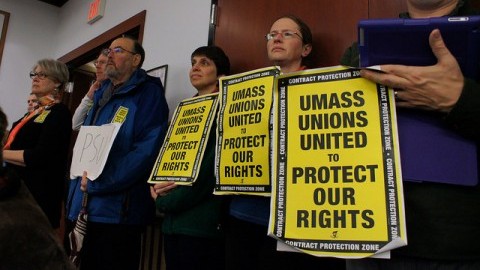 In the Nov. 2 Massachusetts Daily Collegian article entitled, “Resident advisers (sic) and peer mentors attempt to gain just cause,” University of Massachusetts spokesperson Ed Blaguszewski released a statement attempting to justify its unjustifiable refusal to agree to a “just cause” standard and a right to arbitration for resident assistants and peer mentors who are disciplined or fired from their jobs. We would like to briefly address UMass’ phony arguments for why it continues to refuse to treat us with basic fairness and respect.

First, the University claims that there already exists an adequate appeal process for RAs and PMs who are unfairly disciplined or fired. Let’s be clear: the current process is that Residential Life has all the power and zero accountability, no matter how arbitrary or unfair its decisions. Having an appeal to the Chancellor’s office or some other UMass official is not a solution. Like every other University employee, we deserve the right to appeal unfair decisions to a disinterested neutral arbitrator.

UMass claims that the protections we seek are only available to other UMass employees who have served a probationary period of six months to a year and who have no other way to practically challenge their termination. This is patently dishonest. UMass graduate employees and postdocs, who are often appointed for one-year terms and who have no probationary period, have labor contracts that include “just cause” and allow for neutral arbitration of unjust discipline and discharges.

UMass claims that “most terminations (of RAs and PMs) are for violations of the Code of Student Conduct or because of not having met minimum grade point requirements,” both of which can be appealed through existing university procedures. This argument is deceptive. The facts are that, according to information provided to the Union by UMass, between 2010 and the spring of 2015, 56 RAs were fired – 27 for reasons other than violations of the Code of Student Conduct or failing to meet a minimum grade point requirement (figures were not provided for PMs). What is more, the RA contract expressly excludes Code of Student Conduct violations and failure to meet grade requirements, from the grievance process – and the Union has never proposed to change this. Of course, if there are so few cases that do not involve Student Code violations or poor grades, you have to wonder why UMass is so afraid to meet the just cause standard or to allow third party review for those few cases.

Finally, UMass insults us by implying that if RAs and PMs are given the same due process and fairness as every other University employee, it will cause student fees to increase or detract from student services. The Department of Labor has ruled that RAs and PMs are workers just like all other UMass employees. Like all other UMass employees, we were hired to do a job.  If we lose our job, like other UMass employees, we lose pay that we need to live. Unlike most other employees, we also lose our university housing, an often devastating consequence. We also lose the ability to be rehired as an RA or PM and have a permanent black mark on our record. Like any other employee, before UMass is allowed to take our housing and our livelihood, it should be required to show evidence that such action is justified and its action should be reviewable by a neutral third party.

It’s time for UMass to stop stalling, stop making excuses and start treating RAs and PMs with the respect we deserve.