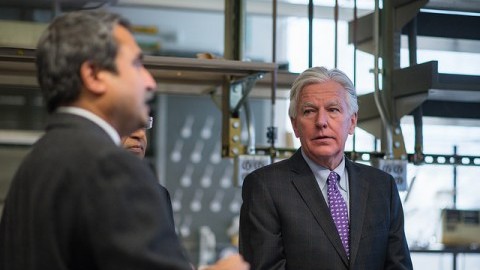 Marty T. Meehan was inaugurated as the 27th president of the University of Massachusetts system during a ceremony Thursday at the Edward M. Kennedy Institute, located on the UMass Boston campus.

Meehan, the first UMass undergraduate to be elected to lead the five-campus university system, vowed to “passionately fight” for the students and faculty of the academic institution which he believes to be “the future of Massachusetts.”

Specifically, Meehan aims to offer “educational programs that both people and the economy require,” which includes more online classes and a greater focus on science, technology, engineering and math majors.

In addition, Meehan said he intends to continue the system’s development of three-year degrees, which have already come to pass at UMass Amherst, UMass Dartmouth and UMass Lowell. His focus, he said, is on crafting educational programs that are right for everyone who wants to pursue a higher education, regardless of their circumstances.

“These may not be the paths that every student will choose to take,” Meehan said. “Many students and families will still opt for a traditional, campus-based educational experience. But these new paths will be right for some students, and so, they should be made available to all students.”

As part of his inauguration, Meehan also set a goal of raising $1 million in private funds for student scholarships which he significantly surpassed before the event, raising $1.6 million.

Meehan, who graduated from UMass Lowell in 1978 after studying education and political science, said that he sees his presidency as a way for him to carry the torch, so to speak.

Growing up in Lowell as one of seven children, Meehan said that no one in his family had ever graduated from college. “Because of UMass, it was a given” that he would receive a higher education, regardless of the circumstances.

“I see myself as carrying the torch that my parents lit,” Meehan said, going on to describe the ways he would make higher education more flexible for the student.

UMass Amherst Chancellor Kumble Subbaswamy, who spoke at the inauguration ceremony, said that Meehan’s experience earning a degree through UMass Lowell allowed him to see “the transformative power of a university education.”

“Now, as president of the state’s public research university system, he truly understands the critical role the University plays in the Commonwealth, providing the opportunities of a college degree, regardless of socioeconomic background, while igniting our full innovative research potential for the greater good,” Subbaswamy said.

Baker, who also spoke, said that Meehan’s experience as a collaborator, a leader and simply as someone who has the energy needed to make great things possible, all combine to make Meehan an excellent president for the UMass system.

Meehan was unanimously elected president on May 1 by the UMass Board of Trustees, the press release stated. He assumed office on July 1.