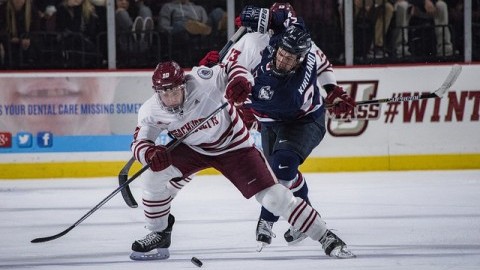 In its second meeting of the season with New Hampshire, the Massachusetts hockey team once again fell behind to the Wildcats not once, but twice.

And once again, the Minutemen came back.

It was Walsh’s 50th career point as a Minuteman, with 28 of those coming in the last calendar year.

Coach John Micheletto praised Walsh’s ability to find the back of the net, dating back to the tail end of last season.

“Obviously the calendar year goal production that has been recorded here as of late, it’s certainly impressive for Shane,” he said. “It’s nice that after getting pucks to the net in the third period, that he got himself into the critical area and was able to bang home a loose puck. For him to score a dirty one as opposed to a real pretty highlight reel goal is a nice addition to his repertoire.”

Despite coming away with a vital conference point, Micheletto thought another encouraging takeaway from this game was his team’s ability to earn a result even when they weren’t at their best.

“Despite not having our A game, I thought we showed we can have a really good B game,” he said. “We had some great minutes out of the Kurt Keats line and Ryan Badger line, our (defense) moved pucks well and defended well, so I thought that was a real positive step forward for our team.”

In Friday’s matchup, Micheletto said an extra focus was made to limit the trio, and he was impressed with the way the Minutemen defense kept a high-octane offense like UNH to just two goals.

“Certainly we had an eye on the (Andrew) Poturalski line, which I think is as dangerous a line as we are going to see in the league,” Micheletto said. “Guys were very mindful to keep the ice small on those guys and mostly try to value puck possession to not allow them to get out in transition.

“Not only against that line, but I thought against all their lines that we did a better job of those things, and were very disciplined while being physical.”

For the third consecutive game, UMass was tasked with coming from behind on two occasions. A goal from Poturalski in the first period was answered by Keats in the second, while Walsh’s late game tally cancelled out Matias Cleland’s goal.

Although falling behind has occurred often for the Minutemen this season, Micheletto does not believe this is a trend.

“Someone’s going to score first. Although you’re obviously trying to push and do that, it’s not always going to be possible,” he said. “We know that it’s a 60-minute game and while we’re going to try to score first and be the first team to three, when it doesn’t we got to make sure to manage that as well as we can.

“When you play in Hockey East, we’re not always going to have an opportunity to get out to the lead.”

UMass will be back in action Saturday night against No. 13 Merrimack.