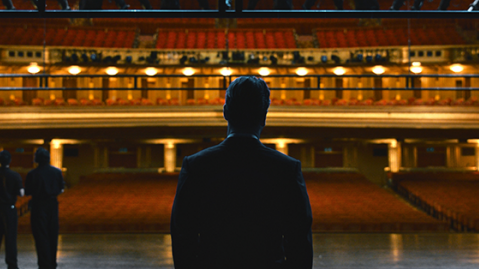 Shortly before the launch of the NeXT Computer in 1988, Steve Wozniak (Seth Rogen) confronts Steve Jobs (Michael Fassbender) and asks him, “What do you do?”

The two men stand surrounded by empty chairs and music stands in the orchestra pit of the Louise M. Davies Symphony Hall in San Francisco. Wozniak disparages Jobs for his undeserved genius reputation and continues, “You can’t write code. You’re not an engineer. You’re not a designer … What do you do?”

Without skipping a beat, Jobs says, “I play the orchestra.” It’s fitting that this scene takes place roughly halfway through the film, since it underlines the overall narrative structure that Danny Boyle employs. The director orchestrates “Steve Jobs” the same way that its title character claims he leads his team. Boyle is a conductor, and his film is a symphony in three movements.

Each of these separate acts create tension by depicting Jobs’ growing professional and personal conflicts. The sequences build in intensity until a curtain call – Jobs enters the stage to introduce the new tech and the film jumps forward to the next launch.

Let me pause to make a quick distinction. “Steve Jobs” should not be confused with “Jobs,” the 2013 film that shamelessly fellated the Apple co-founder’s reputation for slightly more than two hours. The most intriguing element of that film (which was directed by Joshua Michael Stern) was the uncanny resemblance between star Ashton Kutcher and Jobs himself, but its story read like a bloated promotional reel, tritely tracing the rise-fall-rise-again path common to many biopics that aggrandize their subjects.

Danny Boyle’s film is no such ego stroke, and that’s my favorite thing about it. Based on Walter Isaacson’s 2011 biography of the same name, “Steve Jobs” directly critiques its subject – it holds the man up to a harsh light and challenges the audience to see past the sheen of clean designs and product lines that many have grown to glorify him for.

The movie throws itself at the famous Silicon Valley figure, but its indictment never feels ham-fisted. Boyle focuses on intimate moments – between family members and businesspeople alike – and lets Jobs incriminate himself.

Fassbender’s formidable chops turn Jobs into a compellingly deplorable character. The actor’s sturdily muscled physique and iron jawline make for an aesthetically intimidating presence onscreen, and his clipped, cold delivery gives him an inapproachable, enigmatic aura. Fassbender digs into the cruelly pragmatic role. He barks orders at his engineers and dismisses Wozniak’s numerous attempts to get the Apple II team its overdue recognition for keeping the company afloat.

He callously interacts with his ex-girlfriend, Chrisann Brennan (Katherine Waterson), and refuses to accept that he is the father of her daughter. Fassbender’s Jobs treats everyone around him like insignificant cogs in his grand machine. In the actor’s capable hands, the face of Apple becomes easy to hate.

Boyle and cinematographer Alwin H. Kuchler give each act (and correspondent time period) its own unique aesthetic. The mid-‘80s Mac launch is framed in fuzzy, mostly pale green spaces. The NeXT launch feels sharp in stronger red and brown hues, and the iMac finale looks retro-futuristic in bleak, largely blue and silver tones.

Boyle further demonstrates his talents as a visual director, peppering “Steve Jobs” with several compositionally excellent moments. Before the first launch, he pans the camera over a crowd and captures the wave of people rising from their seats to their feet in an impressive wide shot.

Later, Jobs and Hoffman argue in a blank concrete corridor, and Jobs describes a ‘70s NASA satellite called Skylab. Boyle pulls the camera back and overlays footage of the satellite’s rocket launch on the wall behind Jobs. The scene feels like something that would be right at home in one of Apple’s older marketing campaigns, like a smart touch of iconographic satire.

Despite its often-impressive visuals, “Steve Jobs” stays firmly anchored in mediocrity thanks to Aaron Sorkin’s lackluster script. Dialogue is sharp and crisp but nonetheless forgettable. I found that I cared far less about the characters’ words than I did about the manner in which the actors performed them.

Sorkin’s screenplay sometimes works to great structural effect – an argument between Jobs and CEO John Sculley (Jeff Daniels), for example, cuts seamlessly between the present and flashbacks thanks to verbal parallels in each scene – but it largely disappoints.

The screenwriter fails to cement the movie syntactically in the viewer’s mind. His well-lauded rat-a-tat dialogue is still at work, sure, but “Steve Jobs” leaves the viewer far less intellectually stimulated than his terrific effort in “The Social Network.” Both movies present flawed men consumed by their own irreconcilable narcissism, but it seems that Sorkin stumbled in his attempt to reach that same darkly memorable quality that he has in the past.

It’s telling that Universal pulled “Steve Jobs” from roughly 2,000 theaters barely two weeks after its wide release. I saw the film when it opened, and in the time since it has apparently faded as much from my own mind as it has from the public consciousness. Neither solid direction nor a commendable cast could save the film from its unmemorable script. That’s not to say that “Steve Jobs” is poorly made by any means – it just has a glitch I can’t ignore.