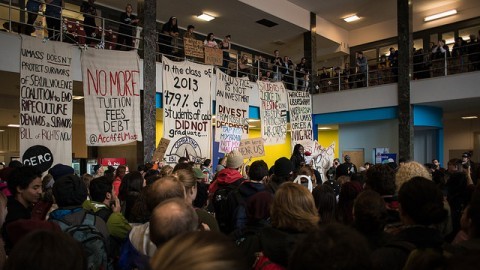 The lobby of the University of Massachusetts Student Union shook as roughly 250 students leapt up and down in unison, shouting chant after chant Thursday afternoon as a part of a national day of action focused on higher education reform.

Members of each group proudly held up posters and draped banners over the Student Union’s balcony, plastered with phrases such as, “Education is a human right,” “Involve us; It’s your job,” and “We are students; not customers.”

The national day of action centered around three demands: free universal public higher education, the cancellation of student debt and a $15 minimum wage for campus workers.

Chrissy Dasco, of CEPA’s access and affordability branch, spoke about her concern with student debt. She argued that students shouldn’t have to struggle to eat or scrape to get by just to prepare themselves for the workforce.

Erika Civitarese, of CEPA’s Student Labor Action Project branch, told her story of growing up as a first generation college student and working in the fast food industry for four and a half years to pull together enough money to attend college. She argued everyone deserves a $15 minimum wage, “whether it’s the workers in the Dining Commons serving your food or the janitors cleaning up your vomit on the weekends.”

In addition to the national demands, the student organizers included six UMass-specific demands: the creation a new seal and mascot because not steeped in the legacy of racism; the implementation of a survivor’s bill of rights for survivors of gender based violence on and off campus; a five percent increase in recruitment and retention of students of color at UMass over the next four years; the removal of all Sabra products from campus retail, publication of UMass’ list of their private investments and divestment from all “companies that profit off Israel’s illegal occupation of Palestine;” divestment from the top 200 fossil fuel companies; and gender-neutral bathrooms in every building, more gender-neutral housing options, and the other demands listed in Gender Liberation UMass’ open letter.

Other student speakers focused on these campus-based demands. Multicultural Organizing Bureau representative Gillian Teng addressed racism on campus, demanding that students of color be provided resources that will help them navigate through the institution of higher education. One banner stated that, in 2013, 47.9 percent of students of color did not graduate.

Teng expressed concern over the safety of students of color on campus and the administration’s response.

Andrea Nyamekye, of the UMass Fossil Fuel Divestment Campaign, demanded UMass invest in renewable sources of energy and abandon fossil fuels for the sake of the environment and the community.

“Everyone has the right to clean air and clean water. It is the right of all inhabitants of this Earth,” she told the audience.

In regards to the removal of all Sabra products from campus, Barham described Sabra as, “a company that invests and helps fund the Israeli armed forces.”

Taylor Glickman of Gender Liberation UMass advocated for gender inclusive bathrooms “that aren’t a million miles away from our class,” as well as gender neutral housing.

“(Transgender students) want to use the bathroom we want by the end of the spring semester of 2016,” Glickman said.

The Coalition to End Rape Culture’s secretary and co-treasurer Steph George and president Priya Ghosh spoke on then necessity of a survivor’s bill of rights. They also advocated for no-contact orders for survivors of sexual assault and gender based violence.

“As it stands right now, one in four women will be survivors of rape and sexual assault by the time they graduate from UMass,” George said.

George and Ghosh expressed concern that there is only one Title IX coordinator for all the students at UMass.