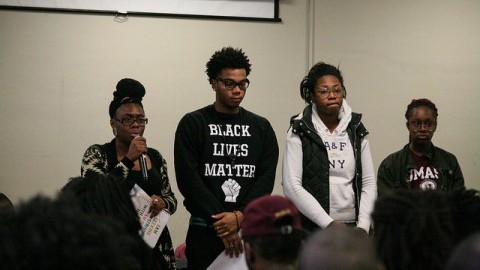 Upward of 50 students, faculty and administrators at the University of Massachusetts met to discuss the University’s handling of racial issues and its commitment to social justice during an “answering session” held Sunday afternoon.

The forum, organized by students in the Black Student Union and Student Bridges, gave members of the UMass community an opportunity to express their concerns and to receive answers and additional information to questions raised from a Campus Listening Session held Nov. 13.

Sunday’s two-and-a-half hour meeting in the Malcolm X Cultural Center comes after more than 100 students staged a walkout Wednesday in solidarity with students at the University of Missouri and to protest a lack of diversity at UMass. Students walked to the Chancellor’s office in the Whitmore Administration Building, where they requested a meeting with administrators.

Student panelists opened with a list of demands, including a more concerted outreach to prospective high school students in Western Massachusetts cities, better facilities for students at the Stonewall Center, an increase in faculty of color and more readily accessible statistics and information pertaining to diversity.

After opening statements from the student panelists and administrators, students spoke into a microphone set up in the aisle between rows of chairs and directed questions and concerns at the panelists seated at tables at the front of the room. Administrators responded to questions with information and policies currently available and took notes on proposals offered by students.

“I think that because we have such a small number of underrepresented minorities on campus, their issues don’t always get heard at a very personal level,” Subbaswamy said. “It’s easy to sit in an administrative organization and think in generalities and look at statistics, but these are very personal stories of how people are experiencing the UMass experience.”

While many issues have been raised at the two forums, he said one of the concerns that has come through most clearly is the safety and health of students.

“We need to make sure that what we have in place is effective,” he said.

Subbaswamy specifically said the University was looking at its handling of issues related to healthcare, especially for students with coverage through MassHealth, during Sunday’s meeting.

Other attendees criticized the Center for Counseling and Psychological Health and the Stonewall Center for their lack of diversity and treatment of students of color. Gelaye responded that the University has recently hired more staff of color.

Many addressed the academic side, raising concerns about microaggressions experienced in the classroom, recruitment and retention of students of color and the diversity of the faculty. Sophie Damas, a communication disorders major, suggested a reporting system that allows students to report incidents of bias with professors.

Newman acknowledged the job that associate dean for recruitment, advising and diversity Alexandrina Deschamps has done through the Emerging Scholars Residential Academic Program to help first generation, under-represented and under-resourced students. Deschamps added that there would be a series of dialogues around race, socioeconomic status and masculinity in the spring.

Newman also mentioned that the UMass system is hiring a new admissions officer to work to increase interest in UMass among underrepresented students, especially in the eastern side of the state. This push is in line with the work of newly hired assistant provost for diversity Leykia Brill.

Subbaswamy said that the University would continue to work through channels including the Student Government Association and the Graduate Student Senate to involve students in University decision-making processes, although he rejected suggestions made by some attendees to pay students for their involvement in such committees.

The University will hold its second forum on these issues Dec. 3 from 5:30 to 7:15 p.m. in Mahar Auditorium. According to an email from Subbaswamy, the preliminary list of participants includes Carol Barr, vice provost for undergraduate and continuing education; professor Mari Castañeda, chancellor’s leadership fellow; Gabriela Weaver, vice provost for faculty development and director of the Institute for Teaching Excellence and Faculty Development; Jim Roche, associate provost for enrollment management; MJ Peterson, secretary of the Faculty Senate; A. Yemisi Jimoh, chair of the Faculty Senate Rules Committee; and Brill.

Subbaswamy said that, while no other forums have been set up yet, he would hold at least three a semester, consistent with student demands.