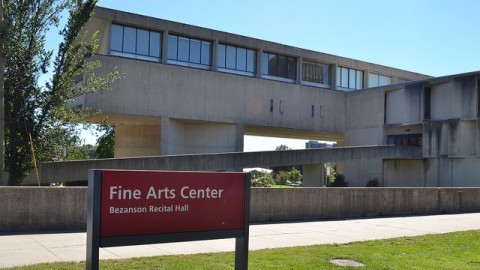 A sea of students in bright blue shirts swarmed upon the Fine Arts Center Friday night, formed staggered lines as they waited under florescent lights, and jittered in place as they anticipated the challenges to come.

But first, they had to complete the task in front of them – a simple game of cornhole. Soft thuds could be heard as beanbag tosses landed on a series of six cornhole boards. Each team competing in the competition had to land two bean bags on their board to pass the first challenge of the fall semester’s Amazing Race.

The event, which has been held biannually since the fall of 2011, attracted 35 teams this semester, as well as four teams who registered but did not compete and one team that dropped out midway.

Having 35 teams and 105 participants is quite impressive in comparison to years past, according to Wilma Crespo, the interim co-director of the Center for Multicultural Advancement and Student Success, which is a key organizer of the event each year.

“We had many more this year,” Crespo said. “I think last year we were in the low 20s, so we almost doubled (our number of teams).”

The competition, which is based on a popular television show, requires that students participate in 10 challenges across campus, which test them both mentally and physically. Once they successfully completed a challenge, such as cornhole, teams then receive a clue that they must decipher in order to move on to the next task.

The event also allows students to work with the University of Massachusetts Police Department, which is in charge of coming up with all of the challenges. Police officers and UMass staff members man each of the stations where competitors complete their challenges.

According to Crespo, the new partnership came about organically.

“Our offices have similar missions and values, so it was a natural partnership for our offices, our sister offices if you will,” she said.

Team check-in and registration began at Wilder Hall at 6:30 p.m. To kick off the Amazing Race, team members gathered outside the building at 7:30 p.m. to listen to UMPD Lieutenant Tom O’Donnell explain the rules.

Even though it is called a race, running is not allowed, nor is the use of bicycles, skateboards or cars to get across campus, O’Donnell said. Teams were instructed to travel together and use crosswalks.

Before their departure to the first challenge, O’Donnell asked the crowd how many of them had competed in the race before. The group was almost equally divided between race veterans and newcomers.

“The police department and CMASS are thrilled to have so many people participating in the Amazing Race,” he said. However, he gave newcomers a piece of advice on what to expect.

“You guys are going to drop out because you’re exhausted more than anything else,” O’Donnell warned. Indeed, by the time the teams returned to Wilder Hall more than two hours later, many competitors were breathing heavily and glistening with sweat.

This year’s competition featured an eclectic mix of challenges. At the Mullins Center, competitors counted the sheets of glass surrounding the ice rink. At the Off Campus Student Center in the Student Union, they sang karaoke to Aerosmith’s “Walk This Way.” At Worcester Dining Commons they rolled their own sushi and at the Integrated Sciences Building, competitors dropped ping pong balls from the fourth floor into the backpacks of their partners on the first floor.

The official winners were announced at around 10:30 p.m., while participants were enjoying pizza, wings and drinks.

The winning team had named themselves the “Mello Dos Squad.” In second place was “Team Name” and “The Movers” came in third. Members of each of the three teams received gift cards to Target ranging from $25 to $50.

After coming in first place, Alexandra Tefft, a senior wedding and event planning major, said that she was both proud of her team and surprised by their victory. The “Mello Dos Squad,” made up of three UMass Marching Band members, had never competed in the Amazing Race before.

“I was so competitive,” Tefft said. “I wanted to win, but didn’t think we were actually going to win.”

Tefft and her teammates didn’t really know what to expect from the race, which she had heard about from a fellow band member and former Amazing Race competitor.

“I thought there was going to be like five teams competing,” she said. “It was (also) more exhausting than expected. I’ve never been so sweaty.”

“We prepare so hard for this,” Fam said. “We go to the gym, we try to anticipate the challenges.”

Fam and Chow said they also took some time off from competing, which gave them a chance to study the campus and find different routes to take, improving their efficiency.

Crespo said she feels the event’s reputation played a big role in the increased number of competitors this year, along with some help from unseasonably warm weather.

“I think we’ve already established a reputation for a fun, competitive program,” she said.