UMass basketball enters 2015 with long list of questions to answer 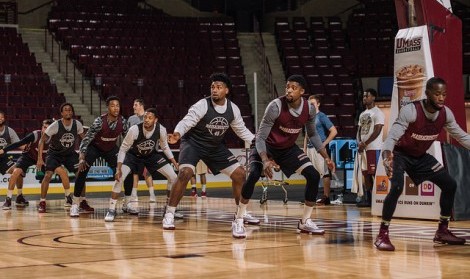 After claiming its first NCAA tournament berth in 16 years two seasons ago, hopes were high among the Massachusetts men’s basketball team entering 2014-15 to put together a repeat performance and return to the Big Dance right away.

Those ambitions never came to life, however, as the Minutemen stumbled to a 17-15 (10-8 Atlantic 10) record en route to a first round exit in the conference tournament.

“I don’t want to speak in clichés because in years past, I’ve said, ‘Hey this is where we’re at,’” head coach Derek Kellogg said. “I don’t want to sugarcoat it with my team or anyone else out there. We want to practice hard, we want to get better and we’ve got to get these young guys along faster than most because we need all of them.

“All nine guys have an opportunity to play. They have a chance to go do something so I need all nine guys to click on all cylinders, which is a tough thing to do.”

The Minutemen have just six upperclassmen on their roster, including Zach Lewis, who is ineligible to play this season after transferring from Canisius College, and Antwan Space, who took an indefinite leave Monday to “attend to a private matter.”

UMass boasts its most experience in its backcourt, with Jabarie Hinds and Trey Davis returning for their senior seasons. Davis leads all returning players with 10.8 points and 3.8 assists per game.

Davis said he embraces an even larger role this year on a team with a fair amount of turnover and inexperience, adding that he strives to become more of a leader in his play as well as his off-the-court demeanor.

“The biggest thing I’ve worked on is being a leader. I always want to be a leader for the team,” he said. “I’m probably going to have to score the ball a lot more.”

Hinds, who transferred from West Virginia in 2013, played his first season with the Minutemen last year and finished with 8.1 points per game while hitting 33.7 percent of his 3-point attempts.

His defining moment last year came in Olean, New York, on Feb. 11 against Saint Bonaventure when he knocked down a 3-pointer with 8.6 seconds left to lift UMass to a 55-53 victory over the Bonnies.

However, much of Hinds’ first campaign with the Minutemen consisted of up-and-down performances as he shifted between sixth man and starter roles. Heading into this season, Hinds said he’s searching for greater consistency out of himself and particularly his jump shot.

“I’m just trying to get my shot more consistent. My mid-range (shot) and making better decisions. I’ve been working,” Hinds said. “I think if my shot can get more consistent, it makes it easier for me. Then when they have to close out hard on me, I can put the ball off the floor and create plays for my teammates.”

Kellogg said he plans to use Hinds as a point guard while Davis shifts to shooting guard off the ball. He added that having two experienced and capable ball handlers is an advantage for the Minutemen.

“I’d take 10 of them if I could, that’s how important it really is,” Kellogg said of the guard combo. “I think that’s the most important thing out there, is having guys that understand the game and maybe could make a play for you as the shot clock is winding down or just have a feel for what’s going on.”

Behind Davis and Hinds, UMass will rely on sophomore guards Donte Clark and C.J. Anderson to step up in their second seasons. Clark is slated to start in the three-position after recording 9.6 points per game last season.

Looking over to the Minutemen’s frontcourt situation, the outlook seems murkier, as UMass only has two healthy true big men in Malik Hines and Rashaan Holloway. Both are freshmen who never got cleared to play last season and enter this year with questions regarding durability and staying out of foul trouble.

Without Space for the time being and with senior center Tyler Bergantino recovering from a shin injury, Holloway and Hines will see an instant barrage of minutes. Behind them, redshirt sophomore forwards Seth Berger and Zach Coleman will provide relief in a smaller lineup.

While an assortment of players still confidently claimed that winning the A-10 tournament and making a run at returning to the NCAA tournament remains the goal entering 2015-16, Kellogg said, for now, the concentration is on working out all the fundamentals – particularly getting comfortable in the half-court defense.

“They don’t play it much in (high school). Most of the guys were the best players in high school or the biggest. Some of the building blocks that were taught 20, 30 years ago they don’t have,” Kellogg said. “But they’re bigger, stronger and they probably have a better basketball game because they’ve played more. It’s just some of the fundamentals that you need to win college basketball games.”

UMass kicks off its 2015-16 season Saturday against Howard in a noon matchup at the Mullins Center.