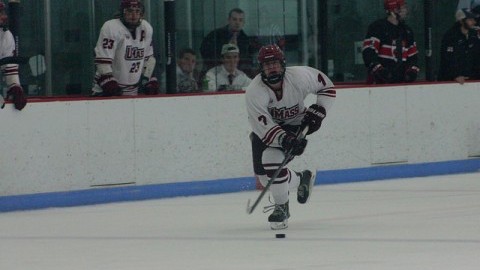 With Thanksgiving break on the horizon, the Massachusetts club hockey team was hoping to cash in two victories over the weekend before its extended time off. But those aspirations were cut short in heartbreaking fashion after losing to William Paterson University in an overtime thriller 3-2 Saturday night.

The Pioneers came into the matchup as the No. 1 ranked team in the northeast region for American Collegiate Hockey Association Division II with UMass trailing closely behind at the No. 4 spot.

The Minutemen had a golden chance to seal the victory in the extra period after senior Alex Rojas broke free on a partial breakaway, but couldn’t convert. The Minutemen followed with two more great chances, but were stonewalled yet again.

Then with two minutes, 11 seconds remaining, UMass junior Allan Haynes got called for holding and put the Pioneers on the power play. This proved to be a costly call as WPU scored after a wrist shot from the point found its way into the back of the net to stun the Minutemen faithful.

“Obviously a tough loss, I don’t think we deserved to lose that game because I thought we showed we were the better team in the third period,” UMass coach Mike DeFazio said.

It was made clear why WPU was ranked first early on as it came out flying out on all cylinders and left the Minuteman scrambling for the majority of the first period. UMass had an especially tough time breaking the puck out of their own zone and had to rely on icing the puck to relieve the pressure.

With that said though, the Minutemen slowly started to shake off the rust and created some scoring chances while tightening up their defensive zone coverage to keep the game scoreless at the end of the first frame.

The second period began with a much more energy from UMass as it looked to take the lead and slow the high-flying WPU offense.

However, after two Minutemen penalties just over halfway through the period, the Pioneers scored their first of the night on the 5-on-3 power play chance.

At the conclusion of the second, it was clear the Minutemen stepped their game up but still lacked a finishing touch to capitalize on the chances they earned.

“The last five minutes of the second we took it to them and I think that opened their eyes in between periods,” DeFazio said regarding the improved play. “We stuck to our game plan and it eventually worked so I think the guys wanted to bring that same level of play into the third.”      Even with a fired up squad, things only got harder in the third period for UMass, as the Pioneers scored again just 40 seconds into the frame to extend their lead to two goals.

It would remain a two-goal game until the five-minute mark after WPU committed two penalties in succession to each other in the same play.

UMass didn’t waste any time, as senior Ryan Daigle converted on the two-man advantage to bring the game within one goal. After working the puck around the perimeter senior Pete Kelly found Daigle in the slot who snapped it past the Pioneer goalie.

Now with only the man-advantage, Rojas scored just 49 seconds later to tie the game back up for the Minutemen.

The game would remain a deadlock at the end of regulation to force the five-minute overtime period.

Special teams proved to be important in the matchup, as there were 15 combined penalties in the game, and four out of the five total goals were scored on the man advantage.

“We had the two power play goals which was good,” DeFazio said about the special teams. “But I was more proud of our penalty kill, they had some long power-plays back to back and we killed them off so I was happy to see that from the boys tonight.”

UMass finished the night with 37 total shots on net compared to 27 from the Pioneers.

The night before, the Minutemen had a dominating 6-0 win over Bryant University in Smithfield, Rhode Island. Goalie Luke Lepine recorded the shutout and sophomore Ted Zimmerman led UMass with a two-goal performance.

Next up for the Minutemen, after their break in play, is a home game against RPI on Friday, December 4 with an 8 p.m. puck drop.