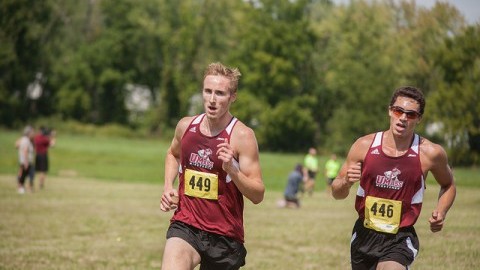 The Massachusetts men’s and women’s cross country teams traveled to a familiar course Friday in Franklin Park for the NCAA Northeast Regional Championship. Both teams went into the meet feeling they still had something to prove to the rest of the region and both finished near the upper echelon of the toughest cross country region.

The favorite going into the men’s race was Syracuse, which was the highest-ranked team in the field, and it came away with a convincing first place finish with 29 points. Iona finished second followed by Cornell in third. The first, second and third individual runner to cross the finish line were all Orange runners, led by sophomore Justyn Knight with a time of 30:28.9.

UMass finished 12th in a field of 37 teams with a score of 447. The Minutemen were once again led by senior Ben Groleau, who finished with a time of 31:46.4 as the 49th runner to cross the finish line. With Daniel Sheldon finishing at 33:00.3 as the fifth UMass runner, the Minutemen had a pack time of 1:14.

“A lot of racing in a big crowd like this is about feel and knowing what your proper pace feels like. We wanted to start out a little slower and play to our strengths which was endurance,” UMass coach Ken O’Brien said.

The 10k distance at the regional championship was the longest distance that the team has run this season. While it was on a familiar course for the men, the larger field of competitors compared to the Atlantic 10 tournament at the same venue changed how the Minutemen could approach the race.

“The runners probably think more about the extra distance leading up to the race, but once the gun goes off and you fully immerse yourself in the ins and outs of the race you don’t think much about it,” O’Brien said.

“We might have hit our ceiling at A-10s, but I still think this was a good performance by our team and I think that the runners can walk away knowing they had a good season, and can still improve going forward.”

The women’s race featured 38 teams and was won by the favored Providence. The Friars finished with 49 points leaving some distance between them and second place Syracuse (92 points). Boston College rounded out the top three with 139.

The first place runner was Dana Giordano of Dartmouth with a time of 20:25.7. The first runner to cross the line for the Minutewomen was junior Heather MacLean with a time of 21:51.1 earning her 44th overall.  Freshman Alexa Livingstone was the fifth runner for UMass with a time of 23:28.5, making their pack time a more stretched out 1:37.

“They really gave everything they could today, we just had a few runners affected by what they have been dealing with over the course of the season,” Minutewomen coach Julie LaFreniere said.

Livingstone has struggled with an illness throughout the last month of the season.  Following a tough performance at A10s, she managed to find her way back into UMass’ top-five scoring runners. She ran with MacLean and Zinner for most of the race as well before the final 1000 meters.

Senior Carly Zinner followed her strong performance at A10s as the second UMass runner to finish for the second consecutive race with a time of 22:29.

LaFreniere went into the meet with hopes of finishing in the top 15 of the region. The scores didn’t break that way, as both Livingstone and Deirdre Martyn dealt with illness Friday. However, LaFreniere was still in good spirits.

“This is a young team and I think the future is very bright. The finish doesn’t reflect our potential, but it is still respectable and I think the runners know that,” LaFreniere said.

While the Minutemen ran their final race of the fall season, the Minutewomen will finish at IC4As next weekend.