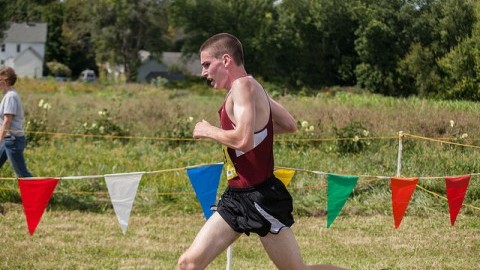 Heading down to Virginia this past Saturday, not much was expected from either Massachusetts cross country team in the Atlantic 10 championship. But both teams left a surprising impression after the dust settled.

The Minutemen were expected to finish eighth, but instead earned second place with a team score of 98 points. Saint Joseph’s took first with 77 points and Davidson third with 103.

Minutemen coach Ken O’Brien and his team have planned this season out from start to finish and didn’t produce eye-popping results early in the year. However, following up their fifth place finish at New Englands with Saturday’s performance at A-10s shows that they are peaking at the right time.

“We’ve tried a lot of different strategies both as a team and with each individual runner through our observations throughout the season, and in the biggest race of the season to this point they kept their poise and stuck to that strategy,” O’Brien said.

UMass was led by senior Ben Groleau, who provided the highest individual finish for the men’s team in program history at A-10’s as the second runner to cross the line with a time of 24:41, trailing only Steve Flynn of George Mason (24:21). The fifth runner to cross the line for UMass was Jay McMahon with a time of 25:31, making the pack time 50 seconds.

“The 50-second gap was nice, when you are going into a meet like this with so many good runners from all over the conference you need a tight pack, “O’Brien said.

Including Cory Thomas and Tyler Hagen, the Minutemen had seven runners finish in less than 26 minutes. The total team effort provided UMass with its highest finish since 2008 when it won the conference.

“They’ve been working hard for this, everyone has felt the chemistry building on the team, and they’ve fed off of each other’s strong performances,” O’Brien said.

“The men’s performance was really inspirational for us today, and in my heart, O’Brien is the coach of the year in the A-10,” women’s coach Julie LaFerniere added.

The Minutewomen had similarly low expectations from the rest of the conference heading into Saturday.

The race was closely contested with Richmond wining the meet by only one point over Duquesne 87-88. But the battle for third place was even closer as UMass and La Salle both scored 111 points. However, UMass lost the tiebreaker 3-2 to push them into fourth place, using the finishes of the first through fifth place runners on each team in head-to-head fashion.

“The whole process had to be explained to me after the race, in years past it would have just gone into the books as a tied third place, but in our hearts we’re going home a third place team,” Minutewomen coach Julie LaFerniere said.

Interestingly, UMass’ sixth and seventh runners both finished ahead of La Salle’s sixth runner, and if they had been involved in the process, UMass on paper would’ve been the third place team. But with the unique new tiebreaking process standing, the Minutewomen still had plenty of individual performances to celebrate.

UMass’ Heather MacLean finished second with a time of 17:20, trailing only Morgan Szekely of La Salle at first with 17:09. MacLean started the race conservatively in 15th after the first mile with the front pack. In the last 800 meters of the race she had worked her way up to fifth and managed to beat out the third and fourth runners by only two tenths of a second at the finish line.

Senior Carly Zinner was the second UMass runner to cross the line in 15th place, earning her a spot on the all-conference team along with MacLean and Groleau. Her time was 17:44.

“Zinner gave an incredible effort, the best I’ve seen her race, and I was really impressed with how MacLean was able to gut out the second place finish at the line,” LaFreniere said. “This team put it all on the line today and they came down to win, and it’s really nice to beat programs like Saint Louis and George Washington who beat us at Paul Short a few weeks back.”

Both UMass teams will be competing in the NCAA regional championship on Nov. 13.