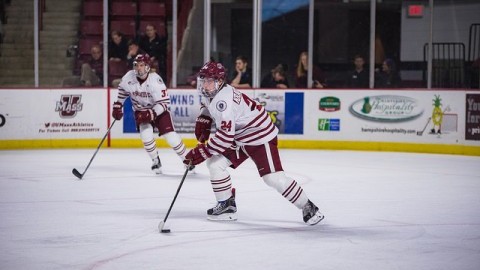 After allowing four goals to No. 3 Quinnipiac Friday night, the Massachusetts hockey team held the Bobcats to only one goal Saturday.

The game-winner was scored just over eight minutes into the game by freshman forward Scott Davidson, after redirecting a pass from junior forward Tim Clifton past UMass goaltender Henry Dill and into the back of the net.

Despite the loss, in which the Minutemen outshot the Bobcats 28-23 and generated multiple opportunities, coach John Micheletto had high praise for his team after the game.

“(It was) probably one of our best and most complete games from puck drop to final buzzer,” he said. “(We) came with tremendous energy and good execution of the game plan. I thought we had the better of the action and probably deserved a better fate, but that’s sometimes the way it goes.

“All in all, it was a great 60 minutes of hockey against a very good team.”

On the defensive side of the puck, Dill made 22 saves, and kept UMass alive after saving a penalty shot 3:28 into the second period.

Micheletto felt puck possession was much better Saturday compared to Friday’s defeat, and thought his team benefited from forcing Quinnipiac to “play a 200-foot game.”

“I thought we got pucks in when we needed to, made plays when we had to,” Micheletto said. “We had the better of the offensive zone possession and cycle time, which created a lot of offensive opportunities. Those were things that minimized their opportunities more (Saturday) than Friday.”

In a game with only three power play opportunities combined, the Minutemen only committed one penalty and killed it off. UMass has now killed 23 of its last 24 penalties, and has allowed just one power play goal in the last eight games.

“We’re taking fewer penalties and your penalty kill is always going to be better when that happens,” Micheletto said when asked about the recent shorthanded success. “The other part of it is we have a lot of young guys, and we’re learning the system better and penalty kill scheme better.”

He added: “As the season’s wearing on I think we’re doing a much better job both disrupting plays up ice, as well as defending in the zone and most importantly clearing pucks when we get them on our stick.”

Although the Minutemen didn’t record a point this weekend, Micheletto acknowledged that Saturday’s game can serve as a confidence booster moving forward when playing ranked opponents.

“On the road consecutive Saturday’s in a ranked team’s building, I think we played excellent hockey,” he said, “It’s evidence to our guys that at this point, it’s not just ‘hey we can play with’, it gives confidence to push them to the next level and say ‘hey we belong here.’ It was an important step for our team to take and to dictate the tempo in an undefeated team’s home building.”

UMass will return to action next weekend when the Minutemen travel to South Bend, Indiana for a two-game series with No. 18 Notre Dame. Puck drop Friday night in the series opener is set for 7:35 p.m.