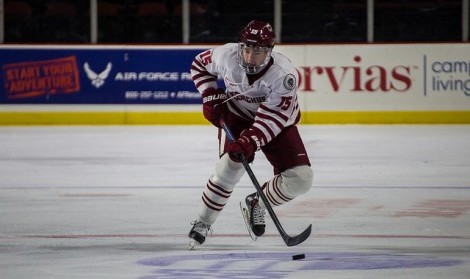 In the waning moments of Massachusetts hockey’s game against Merrimack on Friday night, junior forward Ray Pigozzi was in position to score a crucial game tying goal. The Minutemen (6-3-2, 2-2-2 Hockey East) trailed 3-2 against at the time the No. 13 Warriors.

With goaltender Nic Renyard pulled for an extra skater, a shot towards the net had created a scrum around the goal, and Pigozzi was in a perfect spot when the puck slid towards him with just 20 seconds remaining.

He fired the puck towards a seemingly open net, but Merrimack goaltender Collin Delia made a spectacular desperation kick-save to rob Pigozzi of a game-tying goal. Seconds later, the Warriors put home an empty net goal to clinch the victory.

It was a rare moment this season that didn’t go Pigozzi’s way.

The Evanston, Illinois, native is playing the best hockey of his college career, and he’s on his way to shattering his point totals from his freshman and sophomore seasons. He had 18 points in each, but has already scored five goals and dished seven assists this season in just 11 games. In terms of per-game pace, he’s scoring at nearly double the rate he used to, and is one of five Minutemen averaging more than a point a game.

“I don’t necessarily worry about the points,” Pigozzi said, “I try to worry about my play and being consistent shift in and shift out.”

It’s something Pigozzi has been better at this season, and UMass coach John Micheletto talked about his evolution and praised the junior’s improved work ethic.

“He had a good freshman year. His progression and maturity through his sophomore year had some ups and downs,” Micheletto said. “He had a good sophomore campaign, but certainly not to the levels that his skills or understanding should have put him at.

“He took the summer and he really took a hard look at his routine and approach to the game. I think this year he’s had a much better approach and sense of purpose, and you’re just starting to see what having the right frame of mind and a good skill set will do for you.”

UMass captain Steven Iacobellis echoed his coach’s thoughts, and praised the intangibles his linemate brings to the team.

“He’s had a great start to the season, and I think that comes from his work ethic on and off the ice. He’s put in a lot more time this year, and I think it’s showing off,” Iacobellis said. “He’s always talking on the ice or on the bench, and he’s always got a positive attitude for the next shift and the next game. People probably don’t see that side of him.”

Pigozzi and Iacobellis were roommates their freshman year, and have skated on the same line for virtually their entire UMass careers. The duo have proven to be an effective pairing as top six forwards in Micheletto’s high-paced scheme, and have played with a comfort level with each other that’s made it hard for the fourth-year coach to split them up.

“It’s helped a lot,” Pigozzi said of his partnership with Iacobellis. “Every time you’re out there with someone, it helps you get used to how they play. We’ve been doing it for almost three years now, so it helps to see a familiar face. You kind of understand what he’s looking for and what I’m doing, and we seem to gel.”

This year, the addition of Shane Walsh to the line has turned a good offensive line into a great one. The senior leads the team with eight goals, as the Iacobellis, Pigozzi and Walsh line have already combined for 14 goals and 19 assists.

Pigozzi’s role has traditionally been as a playmaker, but evidenced by his five goals –tying his career high – he’s looking to shoot the puck more this season.  It’s something Iacobellis noticed early on in the year, and it only adds to what Micheletto describes as a “great” offensive skill set.

“He has a powerful stride that he can accelerate and separate from guys in the open. He has a good set of hands. He has a good understanding of the offensive game as to where things are going to open up and how to deliver pucks to teammates,” Micheletto said.

With the level Pigozzi is playing at offensively, his missed opportunity Friday night was surprising. However, Pigozzi quickly redeemed himself in a nearly identical situation Sunday afternoon against Vermont, trailing 3-2 in the final minute with the goalie pulled and in the same spot on the ice (just to the right of the crease). A loose puck slid toward Pigozzi again, and he made no mistake this time in burying the game-tying chance that ensured a 3-3 tie and crucial Hockey East point.

Pigozzi later said he put the missed chance against the Warriors out of his mind, and knew he would eventually get another chance to come up big.

“That’s the good thing about offensive players, they have a very short memory,” Micheletto said. “I remember Allen Iverson – for all he did for the game as a great shooter, when he was cold he kept shooting the ball more. I think Ray had a good sense the kid made an unbelievable save, and he was eager to get that chance back. Fortunately, the guys were able to create an opportunity for him that he put away.”

Pigozzi’s been a big part of UMass’s unexpected early-season success, but hasn’t earned the same level of recognition some of his teammates have. Dennis Kravchenko was the national player of the month in October, Austin Plevy has been named Hockey East rookie of the week twice and a weekend ago Dominic Trento earned first-star honors for the entire NCAA. But Pigozzi has been just as big a part of the team’s 6-3-2 start.

He hopes his dynamic offensive performance can help keep the Minutemen in the win column.

“The wins are great, but I know everyone in the room definitely expects more and knows we have more in there,” Pigozzi said. “Hopefully, we can keep the wins going throughout the season.”