UMass hockey bringing winning back to the Mullins Center 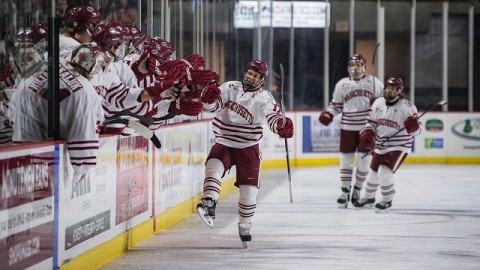 In sports, there’s nothing like playing a game at home in front of thousands of supporters hoping to see a victory.

This year, fans of the Massachusetts hockey team have seen this success, as the Minutemen have yet to lose a contest on their home ice.

With bigger crowds and more students beginning to take notice of UMass’ play, the Minutemen (6-2-1, 2-1-1 Hockey East) are aware of the increased attention being paid to them.

Coach John Micheletto mentioned several aspects that he believes have led to his team’s recent play on home ice, including the opening of the John F. Kennedy Champions Center this year.

­­“Obviously we’ve had a couple of bigger crowds here lately, and I know that helps with all the guys knowing who they’re playing for and hearing that support,” he said after practice Monday. “Aside from that, the fact that as of right now we’re practicing on this sheet a little bit more and I think in the early going it feels more comfortable than in the past with the Champions Center opening up and the basketball team practicing there.”

For captain Steven Iacobellis, he understands that the relationship between a team and its fans is a two-way street.

Iacobellis added: “Sometimes they have a reason not to come out, if we’re not giving them something to come out for. They’re paying to come here, with their time if they’re students, and we’re really appreciative of that.”

Since Micheletto took the reins of the program in 2012, attendance at the Mullins Center has seen a dip in numbers. After averaging 4,209 his first year, the number decreased to 3,891 in 2013 and took an even bigger hit last season when home games only averaged 2,581 fans.

But through three home contests so far this season, the average attendance has been 3,533. This is a welcomed increase, especially for senior Shane Walsh, who has seen some low turnouts in the past.

“I think my freshman year, the first few games a lot of them were (6,000-7,000) fans, but as the years have gone, it’s kind of slimmed down a bit,” Walsh said. “The excitement is there this year, I think people realize we have something special here and I’m just looking forward to seeing the crowd on Friday.”

Perhaps one of the biggest changes the program will see from an attendance standpoint is at this Friday’s upcoming Hockey East matchup with No. 14 Merrimack.

For the first time, a hockey band will be present at the game, adding an extra element to the home environment. While the details regarding how the band will look remain unclear, it will be well-received by the team.

“It’ll be great to see,” Micheletto said. “We see it at other buildings and how much energy it brings to their crowd, so I’m sure it’s going to fill the void in those times when the crowd may not be as loud as it should be and it psyches them to maybe get on board a little bit too.”

Iacobellis credited teammate Brennan Baxandall for bringing up the addition of the band to the athletic department, acknowledging the approval of athletic director Ryan Bamford.

“That’s something the team has been talking about the last two years that I’ve been here at least,” Iacobellis said. “It’s nice to see that the band is on board. Bamford has been on board with that as well so it’s really nice to see.”

“Whenever I think of college hockey growing up, you think of the college band,” he said. “I used to grow up going to (Boston College and Boston University) games, and seeing the band is just a huge part of the culture. It’s going to be a big addition to our student section and the Mullins Center.”

Both Iacobellis and Walsh gave their thoughts on the recent success of former teammate Frank Vatrano, who scored his first goal in the NHL this past weekend for the Boston Bruins in his debut.

“From all of us, we couldn’t be happier for him,” Iacobellis said. “He was a big part of this team last year. I think he’s kept in touch with a lot of us, we’ve all done a good job of talking to him every now and then, so it’s really nice to see another UMass alum have success in the pro ranks.”

Like Iacobellis, Walsh said that many teammates still speak with Vatrano, and although they didn’t get to watch his debut – UMass played UConn Saturday night – they were able to tune in to watch him Sunday.

“I know a lot of the guys have been in contact with him all year, but especially this week,” Walsh said. “A lot of guys were talking to him the night before in Montreal and then obviously we weren’t able to watch him, but to see that he scored a goal is just a huge deal for us.”