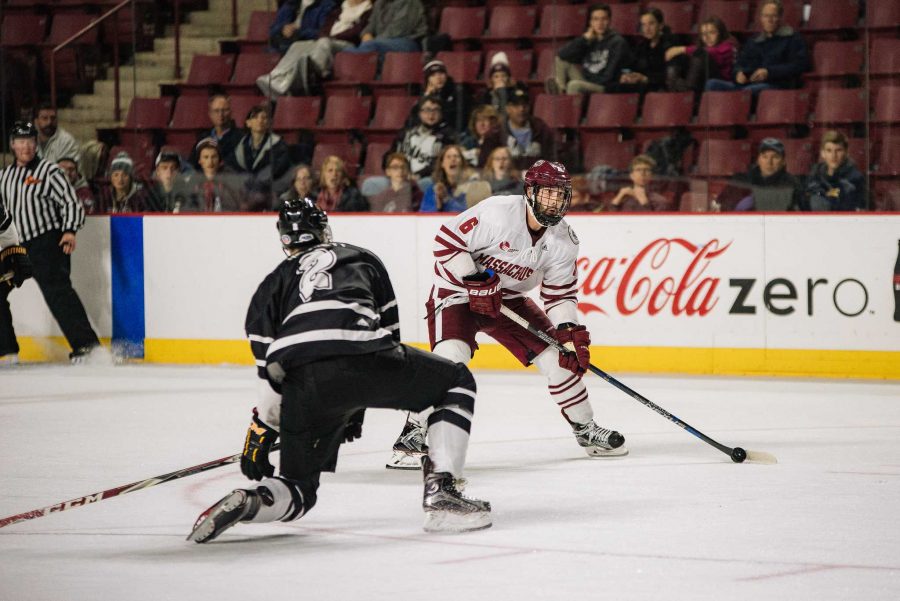 Forty six seconds into its game, Shane Walsh opened the scoring for the Massachusetts hockey team.

One minute, 14 seconds later, Kurt Keats lit the lamp for the Minutemen for his first goal of his career.

“I think the boys, particularly through the first 40 (minutes), played as good a combination of effort and execution as I think we’ve had,” he said. “A lot of great offensive opportunities, I think most importantly was our discipline with the systems, I thought we kept the ice small on them and minimized their chances an awful lot.”

Regarding the quick start, freshman Austin Plevy acknowledged the importance of setting the tone for the rest of the game that quickly.

“I think it’s great,” he said after a three-point night. “I don’t think we’ve been starting slow at any point during the year, I think we’ve always come out firing, but definitely nice for the confidence to go up two quickly like that.”

Despite the Huskies (3-6, 1-5 HEA) cutting the lead to 2-1 before the first intermission, that would be as close as they got to making a comeback, as two straight goals from sophomore Dominic Trento extended the lead to 4-1 with just over 15 minutes to go in the game.

Trento, who has already surpassed his point total from last year with 11, put home two loose rebounds to give the Minutemen some much-needed breathing room. He now has five goals to start the season.

“It’s just part of the game. Sometimes bounces go your way, sometimes they don’t, so it’s good to be putting them in the back of the net right now,” he said. “I’m playing with Dennis (Kravchenko) and Austin here, both super-skilled guys, and I just try to do my job.”

Freshman Nic Renyard was once again starting in between the pipes, making 29 saves and withstanding an offensive spree from UConn in the third period, facing 34 attempts in the last 20 minutes.

“He’s been great, especially these last two games,” Trento said, “For a freshman goaltender he’s been making saves when he needs to make them and that’s all you can really ask for. I know we’re all super pumped about it.”

After losing both matchups against the Huskies last season, revenge presented itself for UMass, although Micheletto didn’t get that sense, saying that both teams have gone through changes since last year’s matchups.

Both Trento and Plevy praised the lively environment at the Mullins Center Saturday night, with Trento saying a good crowd “is all you can ask for in college hockey.”

“They’re awesome,” he said. “It’s a great environment to play in right now, especially coming off last year where sometimes we’d play in front of almost nobody, and then this year is just unbelievable. There’s a buzz and you can feel it.”

“It definitely helps,” Plevy added. “You’re at the end of a shift and you’re tired and you can hear the crowd egging you on, it definitely gives you a little boost so it’s a big positive for us at home.”

The Minutemen will be back in Amherst this Friday for a conference matchup with No. 16 Merrimack College. They will also travel to Burlington, Vermont for a Ssunday afternoon matchup with Vermont.