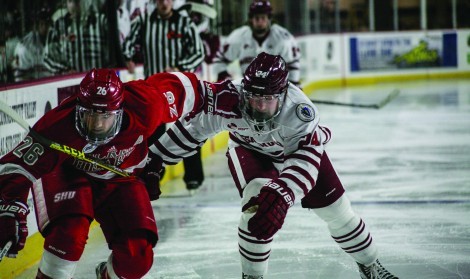 After stumbling to two consecutive losses against then-No. 13 Yale and No. 3 Boston College, the Massachusetts hockey team will look to get back in the win column with a home-and-home series against Connecticut this weekend.

Following a 7-0 setback to the Eagles Tuesday night, there is little time for the Minutemen (4-2-1, 0-0-1 Hockey East) to dwell on their latest defeat.

With only two days to prepare for their upcoming contests against the Huskies (3-4, 1-3 HEA), UMass coach John Micheletto said there are a few adjustments that need to be made when there is minimal time to generate a game plan.

In particular, Micheletto pointed at special teams as an area of focus as the team searches for the most productive line combinations with the man advantage or on the penalty kill.

“I think primarily those are the areas that on a short-term week require a little more attention,” he said. “More often than not it’s just little tweaks or things that you’re going to try to take advantage of or try to keep yourself out of having to rely on, based on who you’re playing.”

In UMass’ loss to BC, it allowed six goals in the second period and could not sustain the blitz after holding the Eagles scoreless in the first period. Against the Bulldogs the previous weekend, the Minutemen allowed two goals in each period en route to a 6-1 loss.

When the puck is dropped Friday night, Micheletto expects to see an immediate response from his team.

“I would expect us to come out certainly early with a real sense of purpose,” he said. “I think the thing that we need to do and haven’t been able to is manage that all the way through, particularly with what we need to do in the second period and not risking more than the reward is worth.”

Defensively, UMass will have to keep its eyes on star freshman Max Letunov, who was drafted in the 2014 NHL Entry Draft by the St. Louis Blues but later had his rights traded to the Arizona Coyotes.

Letunov is tied for third in the country with 11 points and has five goals, but Micheletto knows there’s more to UConn than just him.

“They have some talented kids. I think our defensemen in general have played very well,” he said. “I think a lot of our difficulties and the opportunities that we’ve given up have been a result of the team defense or the play of our forwards.

“Certainly part of it is shift management, part of it is our zone exits, and the biggest part of both of those things winds up coming down to our wall play and getting ourselves out of our own end,” Micheletto added.

Although they have struggled offensively with only one goal in their last two games, the Minutemen have had to go up against two of the top three goaltenders in the nation in Yale’s Alex Lyon and the Eagles’ Thatcher Demko.

Despite this recent funk, Micheletto believes his team has done a good job of generating chances and just ran into hot goaltending.

“We need to get second shots,” he said. “I thought against (Yale) we generated a good amount of offense, certainly both nights we saw good goaltenders and they thwarted those initial efforts.

“We had a couple of glorious opportunities against BC that (Thatcher) Demko made a couple of unbelievable saves on,” he later said. “We didn’t make him work up and down as much as I would like and against any good goaltender you’re very rarely gonna beat him on that first shot, it’s going to be the second or third one that will get him.”

Puck drop is scheduled for 7:05 p.m. Friday night at the XL Center.