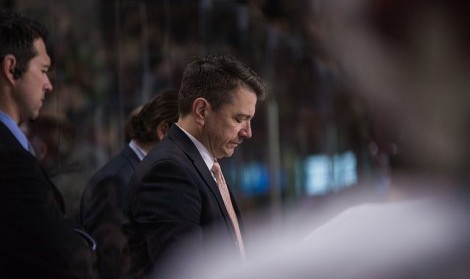 In its fourth game of the season, the Massachusetts men’s hockey team stormed back from a 6-1 deficit to tie New Hampshire 6-6 at the Mullins Center.

Despite UNH having one of the biggest sheets of ice in the conference, it’s not unfamiliar territory for UMass. The ice at the Mullins Center is also large, which is something coach John Micheletto his team can look to when preparing for Friday’s contest.

“Certainly playing here on Friday, playing at Vermont on Sunday and now playing at Whittemore (Center) on this upcoming Friday, I think we’ll have a good idea of how to utilize the big ice and how to defend it when we don’t have it,” Micheletto said after practice Wednesday.

“I think the biggest thing for us is making sure we value puck possession when we have it and don’t feed their transition, which is really how they’re built. Offensively, I think we’ve proven that we can find ways to utilize the big sheet to our advantage and will continue to try to do that Friday.”

For sophomore Dennis Kravchenko, it’s all about “just doing the same things that we’ve been doing.”

“We’ve seen this team before so we should be a little more used to them,” he said. “We just have to capitalize on the weaknesses of their team or the turnovers and just make sure we do everything right.”

In a season where slow starts have been a common theme for the Minutemen, Kravchenko emphasized the importance of not falling behind early.

“Making sure that we come out off the bat,” Kravchenko replied when asked how his team can avoid falling behind early. “We don’t want to let our foot off the gas and just making sure right out of the gate we just come out, start working hard and making plays and hopefully it works out all three periods.”

With both teams displaying various weapons offensively, Micheletto said he would like to avoid another high-scoring outing.

UNH ranks third in the Hockey East at 3.78 goals per game while UMass is close behind in fourth at 3.73.

“I think the key for us is going to be ‘let’s not get into a shootout with them.’ I’d like to try to stay to the things that we really try to build on in terms of scoring first and being the first to score three,” Micheletto said. “If we can keep them to two or three goals, that’s going to give us the best chance to win. We certainly respect their explosiveness in their offense and we want to try and minimize that.”

Just one day after the Minutemen face off against the Wildcats, they will have to make a major adjustment in their game against Merrimack (6-1-3, 2-1-3 HEA) Saturday night at Lawler Rink.

Unlike UNH’s rink size, Merrimack boasts one of the smaller sheets of ice in Hockey East, so UMass will be tasked with making a quick transition if it wishes to get a result.

“Thankfully we get a little pregame skate there on Saturday so we can probably get used to the rink a little bit better and make a better transition,” freshman defenseman Ivan Chukarov said.

Chukarov knows the game versus the Warriors will be a lot faster paced than the one against the Wildcats, although he thinks he and his teammates can handle it.

Using prior experiences from earlier in the season is one thing Micheletto hopes will aid his team to success.

“That’s going to be an interesting one. I think we’ll look back on our Friday night game at the XL Center, and playing at the building in Trenton against Maine and Yale as opportunities,” he said.

“It’s not that dissimilar size wise to (Merrimack), but certainly seeing a team of their caliber and the way that they’re built to play at that building is more the thing that we have to make an adjustment too, not just the building.”

Puck drop is scheduled for 7 p.m. both nights.