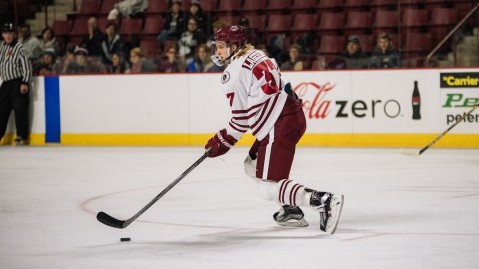 With Friday’s game deadlocked at 2-2 late in the third period, freshman Austin Plevy scored another clutch goal with under five minutes to help the Massachusetts hockey team snap its two-game losing streak with a 4-2 win over Connecticut at the XL Center in Hartford, Connecticut.

After being outscored by a combined 13-to-1 margin in back-to-back losses against No. 13 Yale and No. 3 Boston College, UMass (5-2-1, 1-1-1 Hockey East) put in a strong 60-minute effort to earn its first Hockey East win of the season. Minutemen junior forward Ray Pigozzi put UMass on the board just one minute, 14 seconds into the first period, and Plevy scored the eventual game-winner with just four minutes, 54 seconds left to play in the third.

“It was a real gutsy win,” UMass coach John Micheletto said after the game. “I thought we got better as the game went on.”

The Huskies (3-5, 1-4 HEA) rallied from two one-goal deficits to tie the game at 1-1 and 2-2 but could not find a go-ahead goal in either instance as they dropped their third game in a row. Hockey East rookie of the month and UConn freshman Max Letunov was held without a point and was a minus-two on the evening after scoring 11 points in his first seven games of the year.

In charge of stopping Letunov and his line was freshmen defensemen William Lagesson and Ivan Chukarov.

Lagesson, a fourth round draft pick of the Edmonton Oilers, and Chukarov, a seventh round pick of the Buffalo Sabres, drew primary matchup duties against the touted freshman. But as the road team, UMass was not always able to match up its top pairing against Letunov, and Micheletto said it was a team effort to keep him off the score sheet.

On offense, Lagesson also tallied his first collegiate goal in the 19th minute of the third period Saturday, giving UMass an insurance goal to increase the lead to 4-2.

Freshman goaltender Nic Renyard started in net for the Minutemen and made 40 saves to earn his third win of the season. Micheletto praised the Victoria, British Colombia native after the game.

“His two best attributes right now are tracking and reading the play well, and being very calm,” Micheletto said of Renyard. “When he’s doing a good job of that, the guys in front tend to be very calm as well.”

Junior Rob Nichols started in net for UConn and made 27 saves, but it wasn’t enough for the Huskies as his record fell to 3-4 on the season.

The Minutemen were without several of their more experienced leaders Friday night as a result of a chippy game against Boston College Tuesday night.

Junior captain Steven Iacobellis and senior defenseman Ben Gallacher both missed the game due to one-game suspensions, but Micheletto said a number of players stepped in to help fill the leadership void. He mentioned senior Shane Walsh and junior Marc Hetnik as players that were leaned on heavily, and he also singled out Pigozzi for the role he’s played this season.

“Ray’s been a positive influence for us this year,” Micheletto said. “I think he’s been under appreciated for how consistent he’s been.”

Pigozzi and the Minutemen will look to complete a sweep of UConn Saturday night in Amherst for the second half of the weekend’s home-and-home series. Puck drop is set for 7:30 p.m. at the Mullins Center.