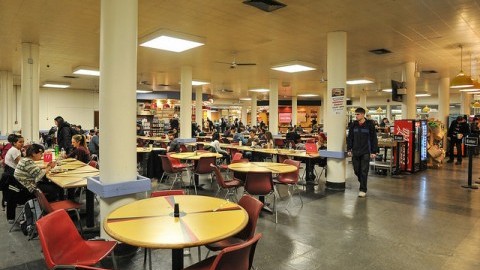 The eatery space formerly known as the Hatch has gone unused by the University of Massachusetts since the Blue Wall dining facility renovations were completed in 2014, but the University is hoping to change that.

Located in the basement of the Student Union, the Hatch was designed as a grille and snack bar that served students since the building opened in 1957. It closed permanently in late 2014.

According to Andrew Mangels, UMass associate vice chancellor of finance and budget director, the eatery closed due to the University’s lack of need for additional dining options after Blue Wall reopened.

“The Hatch was expanded temporarily during Blue Wall construction, but is no longer needed as a primary food service location,” Mangels said. “The Blue Wall project greatly expanded capacity in that area and also permitted modernization and expansion of the food offerings. Consolidating food service operations in the Blue Wall made it easier to serve students in an efficient way.”

The space that housed the Hatch has since been untouched. According to Mangels, building code issues have made the process difficult.

“The University would like to transition the Hatch into usable space given its central location in the Student Union but there are building code issues that need to be addressed,” he said. “Changing the use of the Hatch could require considerable code updates involving sprinklers and fire alarm systems.”

Addressing the building code issues would allow the space to house something other than food service. This, Mangels said, would meet the student needs identified in the Student Experience Master Plan, a campus-wide project that allows students, faculty and staff to assess the conditions of services offered in the University’s facilities.

The needs described in the Master Plan, according to Mangels, are addressed in several

ideas currently in the works for the Hatch. Though plans are not yet finalized, he said that the University is striving to develop a method of transforming the space into a facility that meets needs.

“The on­going Student Experience Master Plan has identified a need for a variety of activities through a very open and participative process,” Mangels said. “These needs include meeting activity space, food service, performance and rehearsal areas and others. The University will be working with SGA leadership to more specifically identify options available to meet those needs (in redesigning) the Hatch.”