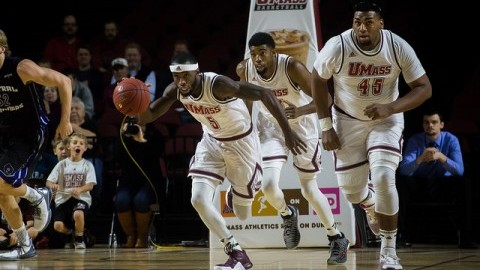 The Massachusetts men’s basketball team is exactly where it wants to be heading into its first test against a Power 5 team: 3-0 to start the season and off the heels of a 27-point victory.

However, with Monday’s contest against Atlantic Coast Conference opponent Clemson (3-0) – in the first round of the MGM Grand Main Event tournament in Las Vegas – will come a new system for measurement for the Minutemen (3-0) early on in the 2015-16 season.

“It’ll be fun for us to see where we’re at playing teams like that,” UMass forward Seth Berger said.

UMass enters the tournament on a high note following an 89-62 win over Central Arkansas out of the Southland Conference in which four players scored double-digit points and the team combined for 16 3-pointers.

With this margin of victory, Minutemen coach Derek Kellogg said it’s led to more energetic early week practices. However, he noted the difference in skill and size that UMass will face against the Tigers Monday.

“The level of play is obviously going to be raised up quite a bit with the size difference of Clemson than say a Central Arkansas,” Kellogg said. “Now we have to be that much sharper, we have to share the ball even more and we have to pay attention to detail even more than we did the last couple of games.”

Berger and Zach Coleman will likely be in charge of going up against Blossomgame and Grantham as go-to forwards who have been pressed into playing in the post more often in smaller lineups.

Coleman has started at power forward over UMass’ first three games and has also played center while Berger has come off the bench to play extensive minutes at both forward positions. Kellogg said the pair of sophomores have been the “heart and soul” of the Minutemen from an energy standpoint this season.

“The biggest thing I want to see is them on the floor healthy, that’s number one. That’s been a huge stumbling block for them over their careers,” Kellogg said. “But when they’re out there, they need to continue to do the little things, like Zach’s defensive rebounding and ability to guard the four-man and Seth’s energy and ability in the press (defense).”

Berger came to UMass as a prototypical small forward, but with depth issues in the front court, he’s shifted to playing in the post more this year and has adapted well.

“I knew I had to play the four, which was a little out of my comfort zone. But fortunately it’s paid off,” he said before Saturday’s practice. “The main thing was having to learn the plays and stuff. That took a couple of practices to get in the right position.”

After playing limited minutes last season, Coleman has emerged as the Minutemen’s top rebounder – accumulating a team-high 24 through three games – and has averaged 8.7 points per game. In preparation for Clemson, Coleman said he’s relying on his “natural ability” on the boards to continue his success against the Tigers’ bigger bodies.

“Just really being in position, that’s something I really do well naturally,” Coleman said. “I really can’t explain how I do it, but I have a knack for knowing where the ball is and getting to it.”

After Monday’s first round matchup against Clemson, UMass will face either Creighton or Rutgers in Wednesday’s second round. The Minutemen and the Tigers will tip off at 9:30 p.m.