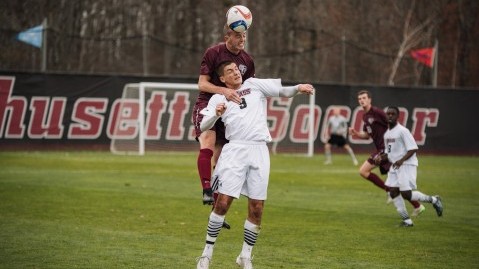 In soccer, sometimes all it takes is one goal to win a game.

It could be a header, a free kick, a stunning shot or a simple tap-in.

For the Massachusetts men’s soccer team, it was a penalty kick that ended its season in a 1-0 loss to Fordham in the first round of the Atlantic 10 conference tournament Thursday afternoon in Fairfax, Virginia.

Just five days after UMass defeated the Rams 1-0 to secure a postseason berth, Fordham got its revenge. In the 83rd minute of play, Rams (7-7-4, 4-3-1 A-10) midfielder/forward Janos Loebe was taken down in the box by a Minutemen defender that resulted in an awarded penalty kick. Loebe stepped up and beat UMass goalkeeper Jorge Becerra to take the late lead.

Despite the early exit from the postseason, Minutemen coach Fran O’Leary was proud of the way UMass, which finished the season at 5-13-1 with a 4-3-2 record in conference play, competed.

“(I’m) very proud of the performance, I thought we were unfortunate maybe not to come away with a result,” he said. “We started off a little tentatively, but that’s to be expected playing a tournament-hardened team.

“We grew into the game,” he added. “The longer the game went, the stronger we became. We had a few really good chances to take the lead, it was always going to be a game when one goal was going to decide it, and they managed to sneak one in in the end.”

Despite being on the losing end, O’Leary was happy with UMass’ defensive play. In particular, he commended goalie Jorge Becerra, who finished with four saves Thursday.

Offensively, the Minutemen outshot Fordham 10-to-9 and recorded eight corners compared to the Rams’ seven. Although UMass came close on several instances, it couldn’t find the back of the net, with O’Leary shrugging off the notion that his team’s offensive struggles from earlier in the season came into play.

“No, not at all,” he said, referring to this idea. “Once you get into conference games you know they’re going to be very tight. But with an inch or two here or there, we would’ve won the game and that’s what happens.”

O’Leary singled out senior forward Mark Morris as one of the players who performed well with the season on the line.

“Mark (Morris) was very bright, very good and gave a real senior’s performance for us today,” he said. “I thought he did a terrific job for us. Sometimes we just don’t get the rub of the grain. We pushed for a goal today and unfortunately didn’t get it.”

Although the season has come to a close, O’Leary recognized the accomplishments the Minutemen achieved this season, exceeding preseason expectations.

“Obviously it’s very disappointing for our guys. We talked after that that’s soccer, and sometimes soccer mirrors life,” he said. “We were ecstatic the other day to get an overtime win, and unfortunately we’ve seen the other side of the coin today.”

He added: “That’s life, so we dust ourselves off. I think it’ll sting a little bit, but these guys have given UMass a great effort this year and have a lot to be proud of.”