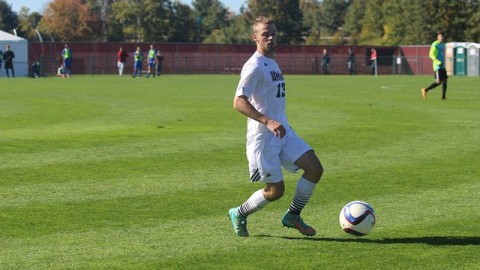 The Massachusetts men’s soccer team’s playoff hopes will come down to one final game after the Minutemen failed to secure a berth in the Atlantic 10 conference tournament in a 2-0 loss to George Washington Saturday afternoon.

In what he thought was a fairly even matchup, coach Fran O’Leary said he felt UMass was unlucky to not come away with a point.

“We feel a little bit unfortunate,” he added. “With the score tied nil-nil, we had a goal called back that we thought was okay so overall, (I was) pleased with much of the game but disappointed with the result.”

Seven minutes into the second half, Will Ellis appeared to give the Minutemen a 1-0 lead after taking a free kick that reached the back of the net, but it was negated after UMass was called for offsides. Two minutes later, the Colonials took the lead after Garrett Heine beat Minutemen goalkeeper Jorge Becerra.

The Colonials’ lead was doubled in the 71st minute when Oliver Curry put home a loose ball in traffic that Becerra had no chance of saving, which essentially put the game out of reach for UMass.

Despite the second half difference, O’Leary felt the Minutemen were on the front foot and didn’t think there was much difference regarding the flow of the game when comparing the two halves.

“We actually came out and took the game to George Washington in the second half, had a couple of good chances and a goal disallowed,” he said. “They broke the score and then we went to chase the game. We pushed the game to them and when you push people forward you run the risk of them getting a second goal, which is what happened.

As has been O’Leary’s message all season, the Minutemen will have to forget about Saturday’s defeat and focus on their final game of the season, which will be held at Rudd Field next Saturday against Fordham.

UMass is 2-0-1 in conference play at Rudd Field this season and boast a 3-3-1 overall record at home heading into the final matchup of the regular season.

“There’s one game left and if we want another game after that we have to win this one,” O’Leary said. “We’re going to be straightforward, we’ve done well at home in the conference. I think we’re undefeated at home so far, and now we’ve got to see it out with a win on senior day if we want to keep our season alive.”