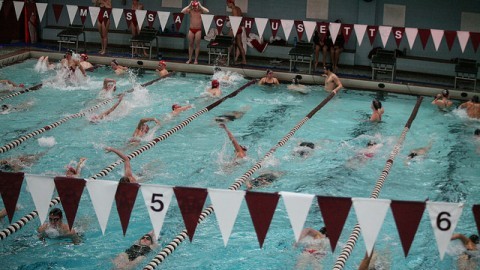 Kellen Gray’s strong weekend in the pool led the Massachusetts men’s swimming team to a win in the three-day Terrier Invitational at Boston University this past weekend.

In a group of seven teams, UMass beat the rest of the field with a team score of 948.5. Army and Boston College finished not far behind with scores of 852 and 832.5, to earn second and third place respectively.

In Sunday’s championship finale, Gray’s time of 1:47.61 in the 200-yard backstroke earned the freshman first place. The time gave him the sixth fastest in UMass men’s program history. The win was Gray’s second of the weekend as he captured first in the 100-yard backstroke in Saturday’s competition.

“(Gray) is a freshman who brings a lot of energy and enthusiasm with him,” UMass men’s coach Russ Yarworth said. “I didn’t expect him to have a time that fast this early in the season, but I’m not complaining and neither is he.”

Maginn also had a top four finish in the 200-yard butterfly on the final day of competition. Connar Patterson finished second in the race with a time of 1:50.85, the fifth fastest in school history.

Kyle Vieira and Austen Sholudko both finished in the top five for the Minutemen in the 1,650-yard freestyle. Alessandro Bomprezzi added a seventh place finish to give the trio a combined 42 points in the freestyle event.

“I try to build a championship team and that relies on guys one through 20,” Yarworth said. “We have good positive competition amongst our swimmers.”

The Minutewomen finished fourth at the weekend invitational with a score of 469. Army won the women’s group with a final score of 896.5 and was followed by the hosting Terriers (876.5). UMass could not come back from an early deficit established on day one.

“I think we performed very, very well,” Minutewomen coach Bob Newcomb said. “Every single swim was the best of the season for the girls.”

Unable to garner many top finishes on the final day, UMass saw two standout finishes as Jenn Robeson and Jenna Diamond recorded the fifth and sixth fastest times in school history in the 200-yard butterfly.

Robeson and Diamond finished with times of 2:06.74 and 2:07.17 in the event, respectively. However, they couldn’t match their strong preliminary round in the finale. Robeson finished seventh while Diamond came away with a 10th place finish in the finals.

“It is one of the things we work on, the sixth session of the meet is tough but I think we are right on track,” Newcomb said.

The Minutewomen did not record any top five finishes on the final day of the event. Kate Orr came away with a seventh place finish in the 1,650-yard freestyle while Cassie Sosnovich placed seventh in the 100-yard freestyle race.

Meriza Werenski had a strong first day on Friday, placing third in the 400-medley relay and fourth in the 200-yard individual medley.

Day two of the Terrier Invitational saw nine times that ranked in the top 10 in both the UMass men’s and women’s swimming program records. The Minutemen had four competitors that finished in the top 10 while the Minutewomen produced five top 10 times.

For the Minutewomen, Werenski and Diamond both finished No. 1 and 2 in the 400-yard individual medley Saturday, giving them the fastest and second fastest times in program history. Sosnovich and Rachel Grant clocked in with the second and third fastest times in UMass history in the 100-yard butterfly.

The Terrier Invitational concluded the fall season for both teams. They will resume competition in January, starting with matchups against Bryant University on Jan. 16.