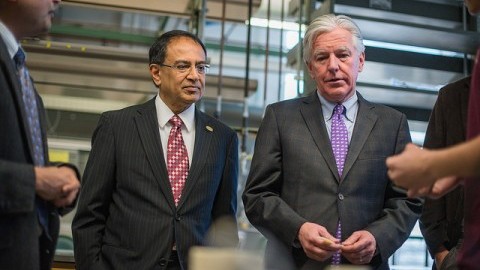 University of Massachusetts President Marty Meehan made history Monday as the first system president to visit all five UMass campuses in a single day, arriving in Amherst to eat lunch with Chancellor Kumble R. Subbaswamy and interact with students and faculty across campus.

Meehan arrived in Amherst around 10:45 a.m. for the second stop of his “Five Campuses, One Mission” tour. He began his day at the UMass Dartmouth campus and followed his trip to Amherst with visits to the UMass Medical School in Worcester and UMass Lowell before concluding his day at the Boston campus.

“I think that students and faculty are what the University is all about, so I wanted to meet with faculty, meet with students and go to each campus. I think it’s an important thing to do and it’s going great,” Meehan said.

The trip was a part of Meehan’s inauguration week as he prepares to be sworn in as the 27th UMass system president. His inauguration is set for Nov. 12 at the Edward M. Kennedy Institute for the United States Senate on the UMass Boston campus.

The day’s “five-in-one” theme was established to highlight the UMass system’s “unique mission to serve the citizens of the Commonwealth” by providing high-quality education through its research that drives the economy and creates knowledge, and also through its public service efforts, according to a news release.

“It’s great because it reminds me of what we’re actually trying to do here,” Meehan said of his visit. “Universities are about great faculty, great students and the interaction that happens between them, and the rest of us are set up to try to help move the institution in a positive direction.”

Meehan began his Amherst visit at the Advanced Design and Digital Fabrication Lab and Center for e-Design before stopping by a History of the Civil Rights Movement class taught by assistant professor Traci Parker in Goessmann Laboratory.

Due to transportation delays, Meehan ran slightly behind schedule before arriving to the class for a 10-minute visit. He and Subbaswamy stood adjacent to Parker as she discussed Malcom X’s involvement and eventual departure from the Nation of Islam.

Subbaswamy eventually entered the conversation, saying Meehan should address the class. Meehan recollected about his experience during the 1960s civil rights era and referenced a speech delivered by then-New York Sen. Robert Kennedy on April 1968 announcing the death of Dr. Martin Luther King to a predominately black audience.

He described the speech as one of the greatest commentaries by a politician under the tense circumstances of racial inequality. He also referenced some of his personal experiences with Georgia Rep. and activist John Lewis throughout their political careers.

He ended by explaining the reason for his visit, saying, “I want to tell you I am coming here because as a president of this system, I can appear isolated. But this is what a University is about, what is happening in this room right now. I wish I could take this class. Wow.”

His last on-campus stop was lunch with Chancellor Subbaswamy at Blue Wall, where the pair sat down by the Green Fields and Wasabi food stations. They snacked on sandwiches, sides of fruit and sampled gelato for dessert while speaking with students in the eatery.

Meehan and Subbaswamy talked with Caoilinn Scott, a junior legal studies and marketing major who was sitting in Blue Wall. The 20-year-old West Hartford, Connecticut native said Meehan approaching her was “fun and surprising” and that she and Meehan talked about why she chose to study at UMass and how she chose her majors. Meehan also spoke to her about his own career path and background.

Meehan praised UMass Dining Services, saying, “I love the food service here. There isn’t any university in the country that has a better food service than UMass Amherst right here.”

The 325-mile tour consisted of four cars for Meehan, his staff and camera crews, according to Robert Connolly, a spokesperson for the president’s office.

Meehan is the first undergraduate alumnus to lead the UMass system and has served in the U.S. House of Representatives and as chancellor of UMass Lowell for eight years. He graduated from UMass Lowell in 1978 with a degree in education and political science and was elected as UMass system president July 1.

For his inauguration, Meehan has established a fundraising goal of $1 million for student scholarships and financial aid. The event will bring together members of the UMass community, civic leaders and representatives from other universities. Gov. Charlie Baker is scheduled to speak.

Colby Sears can be reached at [email protected] and followed on Twitter @ColbySears. Brendan Deady contributed to this report.