UMass rowing ‘pleased’ with results as season winds to a close 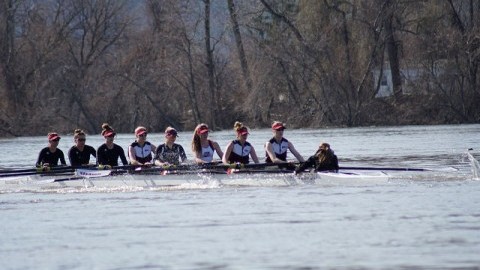 The Massachusetts women’s rowing team traveled to Mercer, New Jersey over Halloween weekend, making a splash in multiple competitions throughout the weekend.

On Friday and Saturday, the Minutewomen competed in the Collegiate Small Boat Challenge and fared well. Though they only medaled in two events, coach Jim Dietz was elated with the results.

“I thought they were fabulous,” coach Jim Dietz said. “We were really pleased.”

More than half the team qualified for final races. The singles teams in particular had a strong showing, earning four top-10 finishes.

Carly Zanatta claimed a bronze medal in the singles A team final with a time of 8:32.34. Dietz was impressed by Zanatta’s performance, noting that she raced against some heavyweight singles and typically races against lightweight singles.

Estefi Marti Malvido finished first place in the C final at 9:25.90. Jill McGill and Hannah McCollough also finished in the top-10 of their respective singles races.

Along with Zanatta, Haley York and Sam Wonderlin were the only other rowers to medal over the two-day competition.

Though she did not qualify for medaling, Emma Hibbard really stood out to Dietz.

“You like to stress people out a little bit and see how strong they are, and she was impressive,” Dietz said.

As a sophomore who walked on last year, Dietz sees Hibbard as a player on the rise.

UMass sent three doubles boats to participate in the 2x, and they certainly helped keep things rolling. All three boats qualified for the final, and they finished third, fifth and sixth in the final race.

Going up against the likes of Syracuse, Northeastern, Cornell and Rhode Island, Dietz was impressed with the team’s performance. He noted how UMass finished well ahead of conference rival Rhode Island in several events.

For the fall season, the Minutewomen have raced primarily in small boat races. Sunday, UMass competed in the 8+ at the Princeton Chase, a 3-mile regatta.

This was the first time they had ever participated in the event. The Minutewomen faced off against some of the top women’s rowing schools in the country, including Yale, Virginia and Brown.

UMass placed 20th out of 65 teams participating, a finish that Dietz certainly was not disappointed about.

He called the event “almost a relaxing experience,” seeing his team perform well in such competitive circumstances, despite a lack of experience racing in the 8+ this season.

While Dietz was impressed with UMass’ showing Sunday, he wasn’t overly surprised.

Dietz pointed out how the experience the team gains from using single and double boats can be invaluable in for 8+ races, where the boats are larger but in comparison less strenuous to control.

According to Dietz, it is much more difficult to race in the single and double boats than in the 8+ boats.

“We’re hoping by doing singles and doubles now it will be beneficial down the road in the spring (with the 8+ races),” Dietz said.

With a solid finish in Sunday’s 8+, it seems as though UMass is already reaping the benefits of having experience with the more difficult single and double boats.

This weekend, the Minutewomen will partake in their final race of the season.

They will be heading to Dartmouth, New Hampshire for the Green Monster Regatta, continuing their preparation for the spring season.

Sam Pollack can be reached at [email protected]