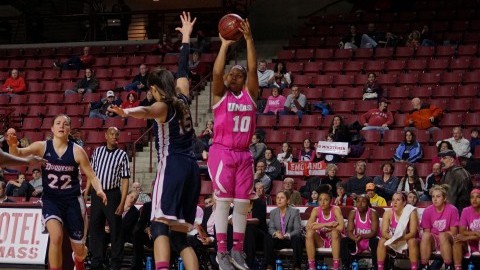 The last time the Massachusetts women’s basketball team started its regular season 2-0 was the 2007-08 season.

That was three seasons before coach Sharon Dawley took control of the program and five seasons before seniors Rashida Timbilla and Victoria Stewart ever stepped foot on the court at Mullins Center.

UMass (1-0) has the opportunity to change this Wednesday as it takes on Harvard (0-1) in Cambridge.

The Minutewomen look to build off an encouraging season opener in which they beat Holy Cross 74-60 this past Sunday.

Dawley hopes the win carries over momentum to the game against the Crimson.

“Winning is fun so you get momentum just out of that,” she said. “It’s also great scheduling for us. There are lots of similarities between (Holy Cross) and (Harvard). It allows us to prepare for both opponents at the same time which is convenient.”

One big reason for UMass’ victory Sunday over the Crusaders was the play of sophomore Cierra Dillard and freshman Bria Stallworth. The two guards chipped in for a team-high 21 and 19 points, respectively.

For her efforts, Dillard was named Atlantic 10 co-player of the week, while Stallworth was voted the league’s rookie of the week.

Stallworth said she will look to keep things simple in order to keep her strong play going.

“I just want to make sure I’m sticking to the game plan,” she said. “My teammates did a great job finding me on Sunday and getting the ball in my hands when I was open. I just want to play my game.”

In Sunday’s game, the Minutewomen had four players score in double digits and three players record more than five assists. This balance was something Dawley said will help moving forward.

“If we continue to have a balanced attack, we’ll be okay,” Dawley said. “I think that will be something that we will look to do a lot this season. On a given day, we have six or seven girls that could go for double figures. Getting everyone to contribute offensively will only help us down the line.”

On the other side of the court, UMass will have to deal with a Harvard team that is known for its perimeter shooting.

The Crimson’s offensive attack is led by seniors AnnMarie Healy and Shilpa Tummala. Healy is the team’s highest returning scorer from last year when she averaged 13.4 points per game. She had 10 points in Harvard’s opening loss to Maine, while Tummala had a career-high 17 points against the Black Bears and went 5-of-10 from beyond the arc.

Stallworth believes it will be important to play sound defensive basketball against the Crimson if the Minutewomen have a chance at their second straight victory.

“Good defense is going to be a major focus for us Wednesday because (Harvard) has a very strong offensive attack,” Stallworth said. “We have to make sure we always have a hand in somebody’s face. Help side defense will also be big if we want to win Wednesday.”

Dawley believes it’s very important to rack up many wins early in the season to prepare the team for conference play down the road.

“It’s all about rhythm and early wins give you the confidence and the confidence grows,” Dawley said. “It’s cyclical. When you’re losing games early in the year, it comes back and it haunts you because you didn’t gain enough confidence early in the year. We’re hoping to grab some wins against these non-conference opponents who are really good and hopefully that will help us once we get to A-10s.”

Tipoff is set for 7 p.m. at Lavietes Pavilion Wednesday night.