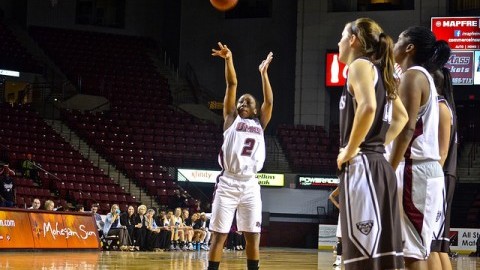 When the Massachusetts women’s basketball team lost former leading scorer Kim Pierre-Louis to graduation last season, there was a rising speculation that the young group might struggle on the offensive end this year.

After all, UMass managed to only put up 60.9 points per game with Pierre-Louis still on the roster in 2014, and her 18.4 scoring average per game that nearly accounted for a third of the lackluster total would surely be missed in her absence.

With one win already in the books to start off the season, however, the new-look Minutewomen (1-0) seem to be just fine without their former star. In fact, it’s very possible that the UMass offense is even better in spite of her absence.

One of the bigger factors for the Minutewomen’s upgrade is that they boast many more scoring outlets than they did over the past few years. In its season opener on Sunday, four different players scored in double figures as UMass cruised to a 74-60 win against Holy Cross. The offense flowed freely too, as three players also recorded at least five assists in the contest and only three of the players that got time didn’t score.

“We have a lot of weapons now,” UMass coach Sharon Dawley said about her team’s offensive improvement. “It’s more of a spread attack. Our goal is to have five or six players in double figures every game. I’d rather have six kids have 10 points and play that way than one kid having to give us 20 for us to be successful.”

With the role of offensive leader up for grabs now, returning starter Cierra Dillard looks fit to take the part with her dynamic triple-threat skills. Dillard, a sophomore, displayed those abilities against the Crusaders over the weekend, as her 21 points and seven assists led the Minutewomen in each category.

But despite her performance, the offense isn’t just about one focal player anymore. There are many talents on the roster this year, as newcomers Bria Stallworth and Alyssa Lawrence stood out in the opener also with 19 and 10 points, respectively. Stallworth is a freshman while Lawrence is playing her first year with UMass since transferring from San Diego State.

Senior guard/forward Rashida Timbilla contributed eight points with five assists on top of that and Kymber Hill added 12 points of her own. With many members contributing so well to start the season, Dillard looks for her team to continue its offensive success against Harvard in Cambridge on Wednesday.

“Into this game, (we’re looking to continue) great shooting of course,” she said. “We have great attackers, so our shooters are really open on the wing and on top. So just doing exactly what we did last game, carrying over the momentum and the motivation (is what we need) this game.”

Overall, the Minutewomen are much deeper in regards to scoring talents than they were last season. The additions of Lawrence and Stallworth to the court have spread out the floor, and opened up options for other figures to score because of their own abilities. Each player serves their own important role and almost all of them together form a major improvement from the days when Pierre-Louis was the main focus of the offense.