Uncomfortable on my own campus 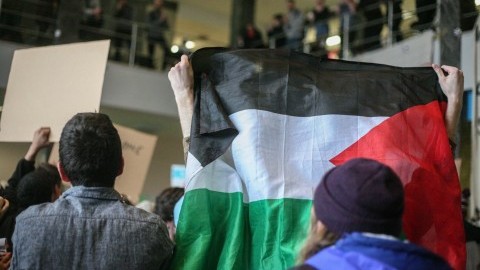 The Million Student March was a movement that took place on campuses across the country on Thursday, Nov. 12 where unified students and graduates demanded “tuition-free public college, cancellation of all student debt and a $15 minimum wage for all campus workers.” Participants at the University of Massachusetts also decided to incorporate its own local demands, which were introduced by the Resident Student Organizations involved in the march. Two demands specific to the campus were the implementation of the Survivor Bill of Rights and mandatory adherence to the Boycott, Divestment, and Sanctions movement, which were introduced by the Coalition to End Rape Culture and Students for Justice in Palestine, respectively.

After seeing these RSOs’ demands on the Facebook event, I began contemplating my own attendance of the event. I really wasn’t sure until the morning of the event if I was going to go, but I decided to attend to show support for the specific causes that I did believe in. I was a little bit nervous when deciding to attend because I did not know what I might hear from the speakers. I also didn’t know how I would feel about hearing BDS being demanded on my campus, but I felt it was important to be there first hand to see and hear it.

At the event, I participated in the group chanting and clapping for most speakers, as their passion and purpose was to create a better and more accessible campus for all types of students. The moment SJP took control of the megaphone, I felt as though I was forced into silence. Watching overhead from the second floor of the student union allowed me to see people’s faces and watch them be influenced by the words of the speakers. I watched these speakers try to convince the student body that boycotting Israel is right for our campus, and that numbed me. It was honestly one of the most unsettling things I hope I ever have to endure. Going from an issue such as rape culture and the problems associated with it at UMass and bettering our accommodations for transgender students, I just couldn’t understand how BDS fell into the same category.

If BDS were to be implemented at UMass it would call for public knowledge of where UMass is privately invested, the end of all sales of Sabra products on campus, and divestment from all companies that profit off Israel’s alleged “illegal occupation of Palestine.”  The overall goal of BDS is to eliminate Israel as the state of the Jewish people. BDS also often condemns groups that promote having a healthy, open dialogue and the idea of coexistence.

Attending the Million Student March was the first time I’ve ever personally felt uncomfortable being somewhere because of my identity. As a pro-Israel student on campus, I have always accepted the fact that some of my friends might not be on my side, and I am aware that I’m not going to sway everyone to share my beliefs. However, last Thursday was the first time I felt that I should have to hide the fact that I am a strong believer and supporter of the state of Israel.

Hearing students at the march chant, “No more pennies no more dimes, no more funding Israel’s crimes” made me want to leave the march because the feeling that gave me was far worse than the good feeling I got from supporting my peers in other groups and standing up fro my right for free education. Overall, I think the purpose of the nationwide movement was incredible and I hope administration does hear the students. I just hope something like BDS is something I never have to face on my campus, because it targets me, a pro-Israel UMass student, and that defeats the purpose of the goals of the Million Student March.

Carly Korman is a Collegian contributor. She can be reached at [email protected]