Why Black Friday is a bad idea 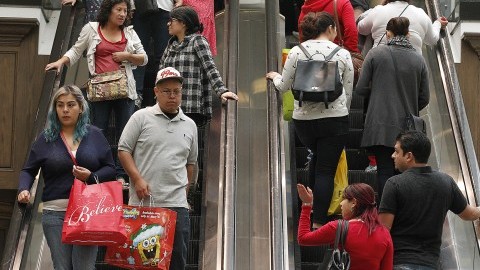 Thanksgiving means a few things for most people. A break from school or work, family reunions, lots of food, football games and, of course, the year’s largest sale day. Black Friday is advertised weeks in advance, and shoppers begin scouring for sales and planning out Christmas ideas as early as July – which is ridiculous enough.

What’s more is that even people who don’t usually shop tend to attack retail stores like madmen trying to get to that one item that maybe they need, but really they probably don’t, and only want because it’s Black Friday and it has a super low discount.

Totally safe and sane, right? Not to mention that this occurs – at least for those braving long lines – in the early hours of the morning. And customers need to, as most stores are wiped bare by 10 a.m. May as well have stayed in bed.

As if that weren’t enough, some stores have declared that once their employees have finished their Thanksgiving meals and family parties, they are to return to work on Thursday to begin Black Friday. Even though it’s still Thursday, and Thanksgiving is still technically a national holiday.

Why wait, right? Let the madness begin early. After all, that half-priced shirt at Target completely supersedes the importance of spending time with family on Thanksgiving.

In 2008, three people were trampled to death as people raced into a Wal-Mart in New York and broke down the store doors. That same crowd also managed to cause a pregnant woman to have a miscarriage in the stress of pushing and shoving. There also, over the years, have been reports of stabbings, shootings, people getting pepper sprayed or knocked down and people getting injured and ignored in the selfish frenzy as others rushed to get what they wanted before it was gone.

The point is, Black Friday is a marketing ploy and nothing else, aimed to get people to spend money they don’t have on things they don’t need. Shoppers wait most of the year – and camp out hours in advance – in the hopes of having a chance to buy an item. And what happens if it’s already sold out?

Black Friday is dangerous and, it takes away from the meaning of Thanksgiving, while only serving to bring out the selfishness of human behavior. It’s better to stay in and sleep, eat some leftovers and not risk going out and catching the madness. If, however, you must work on Black Friday, good luck. Wear your armor.