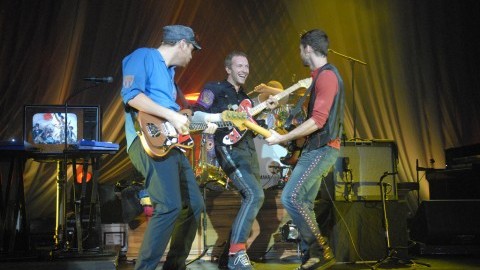 Making up seems to be in vogue this fall.

In early November, Ellie Goulding returned from the bleak, dubby synth-pop of her “Halcyon” days and released “Delirium,” which she called her “most fun and exciting venture yet.” Two weeks later, Adele – yes, that Adele – returned from a nearly five-year hiatus (and a Grammy-sweeping breakup album) and released “25,” which she explicitly deemed “a make-up record.” Frank Ocean is even rumored to be releasing a new single this Friday, which would help me begin to mend my own heart, which broke when “Boys Don’t Cry” didn’t drop last July.

Chris Martin experienced his own now infamous heartbreak last spring, when he and actress Gwyneth Paltrow consciously uncoupled after 10 years of marriage. The unfailingly earnest frontman poured his emotions into the creative process, and the result was “Ghost Stories,” an immaculately produced, sonically crisp bummer of an album that seemed to signal the end of Coldplay’s brand of uplifting silliness.

The band abstained from touring and instead returned immediately to the studio. Just 18 months after releasing those 45 minutes of general sadness, they’re back with “A Head Full of Dreams,” which plays like the dawn to its predecessor’s dusk. Martin and company have traded the broody synthesizers and stilted programmed drums for disco goofiness, processed vocal loops, and a more sugary version of their typical pop schmaltz.

Martin certainly seems to be enjoying himself again. With the emotional weight of “Ghost Stories” now off his chest, the singer sounds like he’s rediscovered the myriad ways that making music gives him pleasure. On the album-opening title track, after a few bars of Guy Berryman’s swaggering bass line, Martin sings, “Oh I think I landed / in a world I hadn’t seen,” with his voice gliding into the sound mix as if he just surfed over to the microphone on a rainbow streaming through the recording room windows.

The song glides along on its jubilant, funky vibe until a synth and guitar interlude transforms the disco jam into a four-on-the-floor anthem. The choral chants that Coldplay has made their trademark post-“Viva la Vida” come out in full force – I wonder if Chris Martin is contractually obligated to belt a certain number of “o” sounds on each subsequent release – and the song ends with a triumphant final piano flourish. It alludes to a kind of bombastic energy that the rest of “A Head Full of Dreams” fails to consistently keep up with.

Parlophone and Atlantic Records did their hardest to advertise that this Coldplay album would feature more collaborations than any other, and it does. I just wish those collaborators were given more to do. Beyoncé herself joins Martin on “Hymn for the Weekend,” but the ostensible queen of pop gets relegated to providing vocal bookends and slight backing vocals during the lead-up to the choruses. The track itself sounds like the British quartet’s stilted attempt at a Beyoncé song – digital handclaps jive alongside a deep, programmed drumbeat, looping piano, and processed horns – but it’s ultimately more garish than gratifying.

Tove Lo gets credited as the featured artist on the alleged duet “Fun,” but she gets short shrift, too – she harmonizes with Martin in the song’s chorus and outro, but her voice is barely there in the mix. I was excited to see how the unique timbre of the Swedish alt-pop singer’s pipes would gel with a Coldplay song. Both her and Beyoncé’s appearances on “A Head Full of Dreams,” however, feel half-baked, like missed opportunities to let their unique talents shine through.

Even the album’s most ham-fisted moment of reconciliation, the tender piano ballad “Everglow,” feels rushed. Gwyneth Paltrow herself joins her ex-husband to provide backing vocals – in what fellow Daily Collegian staffer Jackson Maxwell aptly called “the most Coldplay gesture ever” – but they consist merely of a single trilled note sent through a filter and reverbed into the background.

Coldplay seems to want to give something to everyone here, and the mixed bag often confuses more than satisfies me. “Army of One” sets a lyrical pledge of love to bright blaring organs and a powerful drum beat that congeal into one blissfully soaring wall of sound. But then Martin takes another bizarre detour on hidden track “X Marks the Spot,” rapping through light vocoder over a beat ripped off wholesale from Kendrick Lamar’s “Swimming Pools (Drank).”

I find it almost cruelly ironic that my favorite moment on the album, the lilting and grinding guitar solo that kicks off halfway through the rock-gospel album closer “Up&Up,” comes courtesy of guest Noel Gallagher rather than the band’s own guitarist, Jonny Buckland. It’s the one snapshot on the record that truly allows a featured artist to stand out, but as much as I adore it, it’s too brief and arrives too late to save the album from candy-colored mediocrity.

Promotional materials mentioned that “Coldplay have never enjoyed making a record more than this one. Nor have they been happier with the results.” I’m happy for the band, and can laugh with them at times – for example, Chris Martin seems to find the groovy “Adventure of a Lifetime” and swoony “Amazing Day” as lyrically embarrassing as I do, and that’s part of the charm. Still, I often feel like “A Head Full of Dreams” is an inside joke these British lads have chosen to not let me in on. That’s evidently their prerogative, but I just hope that the next time they release an album it allows me to love it as much as they do.