Around the world: Argentina swears in new president 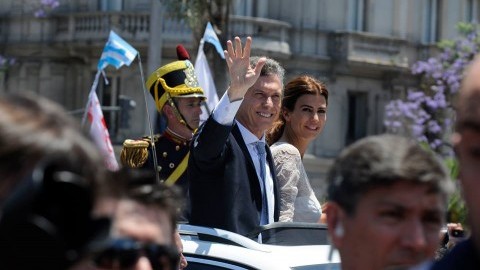 Editor’s note: Every Friday, the Collegian will publish “Around the world,” a weekly series focused on delivering quick-hitting international news from the past week. This is the second installment of the series.

A new era begins in Argentina

Mauricio Macri was sworn in as the new president of Argentina Thursday. His presidency marks the end of the 12-year reign of the Kirchners, which began with president Nestor Kirchner and will end with his successor and wife Cristina Fernandez. Many predict that Macri’s presidency may result in high political tensions in the region, as the Kirchnerist Front for Victory still controls both houses of Congress and Fernandez had close ties with Venezuelan president, Nicolás Maduro. The people remain hopeful that this president will follow through with his campaign promise to unite the people.

Learn more about the problems Mauricio Macri will be facing as president of Argentina here.

The Syrian government and rebel forces reached a deal wherein rebels will vacate the Homs district of Waer for different opposition-held areas in the north. Officials from the United Nations and Red Crescent helped construct and carry out the deal, which has already led to the evacuation of hundreds from the area. Some find this deal reminiscent of a 2014 deal to which rebels claim having agreed to only because “they were starved and outgunned,” stated Al Jazeera. The Syrian Observatory for Human rights insists this deal is better, though, because this deal will be implemented more gradually. International allies hope that these small, local deals will help bring peace to Syria and be more conducive for talks about changing governmental regimes.

Further details on the intricacies of the situation can be found here.

Trump not welcome across the pond

In what turned out to be the most popular petition on the United Kingdom’s government website, more than 500,000 signatures were provided to stop Republican presidential candidate Donald Trump from visiting the nation. Following Trump’s controversial suggestion made Tuesday to ban all Muslims from entering the United States, backlash was felt throughout the world. Although the British Home Office stated, “the UK government has no intention of closing Britain’s borders, as this would create more problems than it would solve,” it would not have been the first time the UK banned someone from entering the country for hate speech. Donald Trump remains unrepentant and unapologetic about his comments.

Read what Trump said to garner such backlash.

A knife-wielding assailant attacked three people in the Leytonstone Tube station in London Saturday. Muhaydin Mire was heard shouting “This is for Syria” during the attack, which came just days after Parliament approved airstrikes in that very country. A passerby, seeing the attack unfold, yelled out to Mire, “You ain’t no Muslim, bruv.” This soon became a hashtag, trending on the internet as people all over the world showed solidarity with the victims of these attacks as well as with the increasingly villainized global Muslim community. Mire is set to appear before London’s central criminal court this Friday.

More information on the incident, including eyewitness footage, is available here.

Still reeling from the Nov. 13th attacks to their capital, the French people seem to be turning to the rhetoric of their far-right National Front (FN) group. The party’s platform is rooted very deeply in anti-immigration and anti-Europe beliefs, which seem to mirror the sentiments of those who blame the influx of refugees and other migrant groups for recent turmoil around the world. Led by Marine Le Pen, daughter of former-FN leader Jean-Marie Le Pen, the party is preparing to campaign once again in 2017 having lost to current president François Hollande in 2012. While support grows, so too does opposition. The AFP reports voter surveys “showing that FN leader Marine Le Pen and her 26-year-old niece Marion Marechal-Le Pen are likely to lose in their respective regions despite dominating the first round.” The second round of votes will be cast Sunday.

Who is Marine Le Pen and what does her party stand for?

Sabrina Negron can be reached at [email protected]