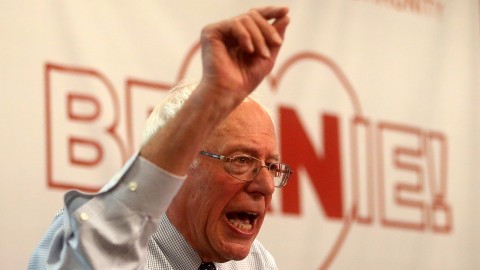 Sen. Bernie Sanders speaks during the "Brunch with Bernie" event at the National Nurses United office in Oakland, Calif., on Aug. 10, 2015. (Aric Crabb/MCT)

Presidential hopeful Bernie Sanders will visit the University of Massachusetts Saturday, marking the first of two planned events in the Commonwealth that day.

Sanders will appear at the UMass Fine Arts Center, 151 Presidents Drive, for a 1 p.m. rally called “Future to Believe In.” The Vermont senator and Democratic presidential candidate plans to address a variety of issues, including the rising cost of higher education and climate change.

Doors open for the event, which is free, at noon.

Sanders will also appear in Worcester at 5 p.m. Saturday. He’s scheduled to hold a similar rally at North Hill High School, 140 Harrington Way, and doors will open at 4 p.m.

Hundreds of UMass students rallied in support of Sanders in late October at an event held on campus. The event featured both students and professors who spoke to a crowd in support of his policies.