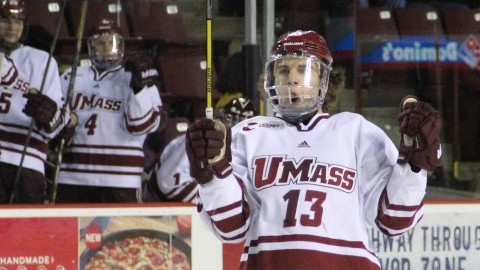 Former Massachusetts hockey forward Conor Sheary was called up by the Pittsburgh Penguins for the first time in his career Tuesday night.

As a part of the Wilkes-Barre/Scranton Penguins of the American Hockey League, the 23-year-old is tied for fourth in the league in scoring with 25 points in 24 games, 19 of which came via assists. He was tied with teammate Dominik Simon for most points on the team.

A Melrose native, Sheary finished his UMass career (2010-2014) with 104 points, consisting of 38 goals and 66 assists. In his sophomore campaign for the Minutemen, he recorded a career-high 35 points, finishing with the second most assists on the team and tied for third in goals.

Last season, Sheary led the way in scoring in both the regular season and the playoffs for WBS. In the past two postseasons with the team, he has averaged one point per game (23 points in 23 games).

Sheary will make his debut for the Penguins Wednesday night against the Boston Bruins in Boston in a game that can be seen nationally on NBCSN. Sheary will skate on the same line as Matt Cullen and Patric Hornqvist.