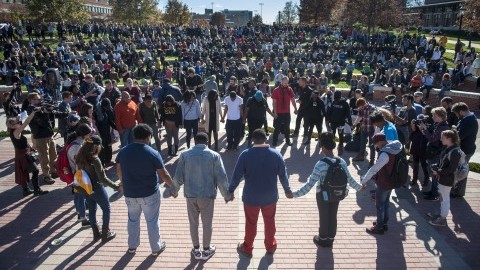 Two weeks ago I was in Washington D.C. for an intersectional, direct action demanding progress be made on racial, immigration and environmental justice from the current administration and the 2016 presidential hopefuls.

While laying out our sleeping bags on a church floor my friend turned to me, looking up from her phone, and said, “the president of the University of Missouri just stepped down because of a student-athlete strike after his mishandling of campus racism.” I flatly replied “huh,” and paused in mock consideration.

A quick glance at history shows mass action has often been the prime cause of social change. However, the idea that actions taken by the primary stakeholders in a community, such as students, citizens, and residents, can affect institutional change is more controversial than ever. From the French Revolution, to the Black Power and Civil Rights movements, to successful decolonization efforts around the world as in South Africa and India, social movements make change.

Not only do self-designated, reasonable and sympathetic liberals decry mass movements as ineffectual, but the people at the heart of these movements – the organizers – are erased or condemned.

The view of history we’re taught in high school and on television is typically that of a charismatic leader who spurs the masses to action through a memorable speech at a grand rally. The people who spent hours having one-on-one conversations with the masses are nowhere to be seen. When we learn about Martin Luther King’s “I Have a Dream” speech at the March on Washington for Jobs and Freedom, we rarely valorize the NAACP, Union rank and file, and Student Nonviolent Organizing Committee members who spent countless hours making phone calls to community leaders to organize buses to the march, fundraised for event materials, and risked their lives registering black citizens to vote in the deep South.

There is an inherent distrust of those who are intentionally trying to change our society and our political opinions. SNCC organizers who traveled to the South in 1961 as part of the Freedom Rides and young racial justice organizers who traveled to Ferguson in 2014 were both slurred with the historical epithet “outside agitators,” and its recent incarnation “professional protesters.”

I get it. I used to be a ruffled sympathetic liberal. “What’s your concrete plan?” I’d implore. I distrusted marches and rallies. Where was the intellectually difficult conversation about the tough decision at the heart of the issue? “Why don’t you just meet with decision-makers?” I asked rhetorically while clicking my tongue. It wasn’t until I tried to convince my friend to join me in attending the 2013 Forward on Climate rally, to protest the Keystone XL pipeline and push Barack Obama to take bold climate action, that I articulated the purpose of rallies.

Meeting with decision-makers and developing policy proposals are both necessary tactics to win change. But they are not sufficient. A rally’s purpose is to build and retain the base, gain media attention and display grassroots power. The tactic does not lend itself to reading aloud 10-page policy documents, even though we have written them. The tactic doesn’t lend itself to sharing the timeline of our frustrating attempts to meet with decision makers and calmly negotiate, even though we have.

As a critical sympathetic outsider I only glanced at the movements in front of me and confirmed my own biases. I didn’t find the policy documents and the gradual and strategic escalation after failed negotiations because I wasn’t looking for them. I didn’t ask to be included. I didn’t attend meetings.

Effective organizing strategy includes tactics both inside and outside official decision-making processes. We send emails and make phone calls. We schedule meetings with administrators and lobby our senators. We hold our own meetings to share our grievances and work out solutions. We develop policy documents. We collect petition signatures. We intentionally agitate. We shout into megaphones. We hold signs with catchy one-liners that can’t possibly contain our policy document, our emotional connection to the issue, our complete understanding of our solution and collective social vision.

We block traffic in busy intersections. We gather in businesses and scream and shout until the cops are called. We shuffle outside, past barking police dogs, quaking in solidarity and fear. We sing songs that remind us of our connection to past struggles. We realize that there have been organizers before us and there will be many after.

We often lose. If our issues were easily solved, then we would have already won. Organizing isn’t required to keep the status quo. No one runs grassroots campaigns to raise tuition and fees, lengthen mandatory minimum sentencing, keep big money in politics, close down public schools, keep carbon caps high, pass international trade deals, and keep wages stagnant. By definition, we’re asking for decision-makers to work against their closest allies’ interests. People tend to take the path of least resistance, and the inertia of the status quo doesn’t resist.

We sometimes win. It takes a long time, a lot of work and some luck. It takes people supporting each other to be involved in organizing for the long haul. Anti-black police violence, prison reform and the student debt crisis are now ballot-box issues. Trans students will have access to healthcare and students of color have access to consolers. The University instituted a Socially Responsible Investing Advisory Committee. Peer Mentors are unionized. Dining Services plans to increase meal plan fees were rolled back. Student businesses have access to Dining Dollars. Decision makers-tend to also take the path of least resistance, and we apply pressure to make sure that path is the one we want.

So please, ask to be included. Please, attend meetings. Please, share your grievances and solutions. Please, help how you can. We need you to retweet, make food, make phone calls, meet with decision-makers, research policy – and yes, attend rallies.

Please, be part of the long history of social change so we can all win.

Editor’s note: The above piece has been edited to correct grammatical errors.