Justin Bieber tries too hard to please on “Purpose” 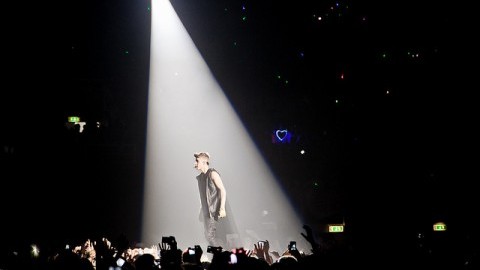 To say that Justin Bieber’s road to his latest album “Purpose” has been rocky doesn’t even come close to capturing the full picture of his personal turmoil. Bieber’s antics have dominated headlines significantly more than his musical progression, with highlights like being filmed urinating in a bucket and getting arrested for a DUI in Miami.

For a while, it looked like he was doomed to travel in a downward spiral like many of his child-star colleagues who took a similar path in their transition to adulthood. Now, one year and a roast later, Justin Bieber finishes his apology tour with his most accomplished album to date, “Purpose.”

This isn’t to say this means “Purpose” is a classic. It is obvious from the album’s sound that Bieber is attempting to reach an adult audience that was previously inaccessible to him in his earlier releases. Propelled by the strength of the singles “I’ll Show You,” “What Do You Mean” and “Sorry,” he captured an older demographic that has eluded him throughout his career with the use of more mature themes and wordplay.

But while the strength of the album’s high production values and his smooth voice only benefit him, Bieber struggles throughout “Purpose” to consistently reach the high standard that the album’s own singles placed on him.

With this album, Bieber finally actively tries to explain what his life is actually like. Bieber sings, “My life is a movie and everyone is watching,” on “I’ll Show You” (which is easily one of the highlights of this album), shedding some light on the insecurity and vulnerability that has been missing from his music since the start of his career.

The strength of the songwriting has improved dramatically over his previous efforts, bringing a real sense of gravitas and weight. In spite of that, there are plenty of missteps. The fact that “Love Yourself” does not come off as an angry tirade is solely to the strength of Ed Sheeran’s ability to make negative emotions palatable for a wide audience.

“Children,” which is Bieber’s attempt at a “Man in the Mirror” type of cultural moment, is nearly laughable in its attempt to stir the public conscience. “Life Is Worth Living” seems artificial in its sentiments, reaching for positivity in order to paint himself in a different light after all the negative press. It’s just obvious that Bieber is trying incredibly hard, which goes against the type of music he is attempting to create that needs to look effortless in order to succeed.

Throughout all of this, Skrillex is the producer that functions as the glue that holds the whole album together. His formidable production of “Sorry,” “I’ll Show You,” “The Feeling” and “Children” show his versatility and talent as a pop producer. In spite of the fact that he does not produce every track, it is apparent that Skrillex had a huge hand in crafting the overall aesthetic of the album, pushing Bieber out his original teen-heartthrob sound into the world of EDM, which works flawlessly with Bieber’s falsetto tone.

The positive public response to the Bieber/Skrillex/Diplo collaboration “Where Are Ü Now,” which was arguably the song of the summer, was the beginning of Bieber’s music bending in this direction and marked the beginning of Skrillex’s role in reinvigorating his stagnant career.

Throughout the entirety of “Purpose,” Bieber panders to his audience in an attempt to reposition himself as the next Justin Timberlake, instead of pop’s next bad boy poster child. For the most part, he succeeds. But while there are plenty of highs and lows, Bieber shows he’s ready to take on the world of music again and move further towards the direction of a fully established artist.

While “Purpose” is more of a step in that path instead of a full convergence, his new album is an important milestone in the young star’s career. The sky is the limit.

Kunal Khunger can be reached at [email protected]