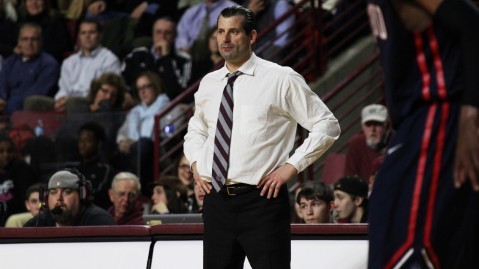 Basketball in Amherst and the Pioneer Valley was the hot commodity in the mid 1990s that received as much buzz and crazy fandom as any major college basketball powerhouse has experienced throughout the history of the game.

There wasn’t a single empty seat in the Curry Hicks Cage or Mullins Center during those years and students at the time would have to camp out days in advance to get their tickets to see one of the best shows in town.

The 1995-96 season for the Massachusetts men’s basketball team was the apex of that era. Headed by newly-inducted Hall of Fame coach John Calipari and National Player of the Year Marcus Camby, UMass finished with a 35-2 record and a trip to the Final Four.

However, after the NCAA discovered that Camby accepted gifts from an agent while still a member of the Minutemen, the NCAA stripped UMass of its tournament wins and vacated the program’s only trip to the Final Four.

“That’s just the rule that they decided to do. There was nothing you could do about it,” said Lou Roe, who played for Calipari from 1991-95 and currently serves as the assistant director of basketball operations.

“You can’t take away the fact that, that team was a winning team and a team with character. That was a team with a great coach and great players,” Roe said.

Roe added: “No one can take the days and the nights that these guys were actually in the Cage, and all the other places of training to get to that point. Yeah, they can take the banner away and they can take all that stuff away, but you can’t take away the hard work that we displayed on the court and what the coaching staff did.”

Wednesday night during halftime UMass will honor Calipari’s name and hang it on a banner alongside the other former Minutemen – George Burke, Camby, Julius Erving, Roe and Al Skinner – who have had their jersey retired.

Despite the vacated tournament wins, the 1996 Final Four banner still hangs in the rafters at Mullins Center in addition to Camby’s statistics that still top some categories program’s all-time record book.

Minutemen head coach Derek Kellogg, who also played alongside Roe from 1991-95, also spent time on the sideline with Calipari as an assistant coach at Memphis from 2000-08.

Kellogg said that neither he or the current UMass team have talked much about Wednesday night’s ceremony or the Final Four year.

Calipari won 193 career games with the Minutemen and led them to five NCAA tournament appearances from 1988-96 in addition to five consecutive Atantic 10 championships from 1992-96.

“(The team) obviously understands what Coach Cal meant to this place and the Final Four year. You have Lou and myself here from those years so they understand. It’s been nice that he’s come back a little. He means as much as anybody to this basketball program and I think it’s pretty cool,” Kellogg said.

Both forward Seth Berger and guard Trey Davis said they were aware of UMass’ glory in the 1990s, but deferred most of their focus to Wednesday’s opponent New Orleans after suffering back-to-back last-second losses against Central Florida and Florida Gulf Coast last week.

“Obviously our main concern is going out and getting a win. We need one right now and we want one. That’s not really what’s on our minds right now, we are jut focused on going out, playing hard and getting a win to get back on track,” Berger said.

“(Monday) we’ll talk about it because it’s much closer, but today we are just focused on those two games down in Florida. We are going to represent well. It’s going to be a fun week and a fun day on Wednesday. I’m looking forward to it,” Davis added.

Roe said he is looking forward to Wednesday night’s ceremony and is happy to be a member of the Calipari era and what it meant to UMass’ basketball program.

“I was happy to know I was a part of that process and see his growth as a coach. I believe I was one of his first marquee guys to come to UMass. I saw that early process and what it was like for him and he was very passionate about what he wanted to do and where he wanted the program to go, I’m happy for him and I’m happy to be apart of it,” Roe said.

Tuesday night will mark the start of the Calipari ceremony as he will be honored in Boston at the Colonnade Hotel with Camby, Kellogg and Roe all expected to be in attendance. The reception is set to begin at 6 p.m. while individual tickets can be purchased for $300.

Wednesday night’s game against the Privateers (3-5) will tip off at 7 p.m. and UMass will be wearing alternate throwback uniforms to honor the Calipari era.