Kurt Keats settling into his role with UMass hockey 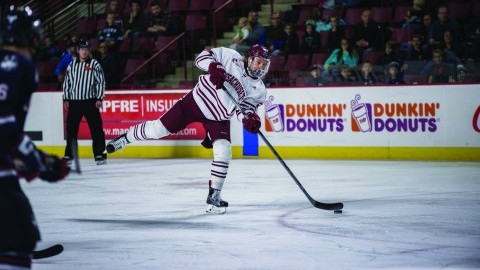 In a season where freshmen Austin Plevy, Nic Renyard and William Lagesson have all been in the spotlight for the Massachusetts hockey team, it is easy to overlook the contributions of first-year forward Kurt Keats.

Keats, a Winnipeg, Manitoba native, has three goals and three assists on the year for the Minutemen (6-5-4, 2-2-4 Hockey East), including three points in UMass’ last four contests.

Before ultimately deciding to continue his hockey career in Amherst, the freshman had always had the Minutemen at the top of his list.

After just three points through the first 10 games of the season, Keats scored goals in consecutive road games against New Hampshire and Merrimack on Nov. 20 and 21. An assist against then- No. 3 Quinnipiac six days later topped off the stretch of recent offensive contributions.

Playing his first year of college hockey, Keats said it’s all about getting comfortable as he plays more games.

“It’s something we can all build on and moving forward, that confidence can only get bigger and stronger and I’ve definitely been feeling pretty good about my game,” Keats said when asked about his recent success.

For coach John Micheletto, it’s evident Keats has gotten better as the season progresses, despite a tentative start to his college career.

“I think in the early part of the year he’d be the first guy to tell you that he was worrying about everything rather than just settling in and getting comfortable playing,” Micheletto said after Monday’s practice.

“He got four or five games in and all of a sudden took a deep breath, you see how much his game has come over that time,” Micheletto added.

Throughout the season, Micheletto has praised the amount of depth on UMass’ roster and it was put on display in last Saturday’s 1-0 loss to the Bobcats.

With Plevy not in the starting lineup, Keats replaced him on the Minutemen’s top line alongside Dennis Kravchenko and Dominic Trento.

“They’re definitely two guys with big pedigrees and a ton of talent that work pretty hard, so that was pretty special,” Keats said. “I just tried playing my own kind of game, working hard and getting them the puck and trying to make some plays when it was there. Hopefully moving forward we can start to generate some offense for us.”

Micheletto added: “We thought it was important at Quinnipiac on Saturday to have a little bit more of a forecheck presence and some pace on Dennis’ line and I thought he brought that to that group real effectively. Whether it’s he or (Patrick Lee) or Keith (Burchett) or guys coming in and out of the lineup, I think as a coaching staff we feel we have a lot of flexibility that way.”

“It’s been really good. I’ve played center, he’s played center. We’re both on the same line and I really enjoy it,” Widmar said. “He’s a workhorse out there, he helps me a lot and I think he helps the team a lot.

As with every freshman, Micheletto knows Keats can make improvements to his game, although he feels Keats  “is already playing beyond his trajectory.”

“I think he could shoot the puck more. With all of our new guys, that window to shoot is narrower than it was at the previous level and I think he’s adjusting to that idea now that once it gets on your stick you have to have an intention of ‘this is what I’m going to do with it,’” Micheletto said.

“That’s gotten better and you’re seeing that he’s generating more shots than he did a month ago,” he later added. “Even where he is now that can get better just with the work on his release and what his pre-puck awareness is once he gets into the zone. His heart and courage and tenacity put him in a lot of good spots.”

When the Minutemen head to South Bend this weekend for two games against No. 20 Notre Dame, Keats believes if UMass plays the way it did last Saturday, it can compete with anyone.

“I think any time you go into a weekend you obviously look for two (wins). I feel pretty confident we can go in there and steal two from them,” Keats said.