Letter: Now is the time for UMass to divest from fossil fuels 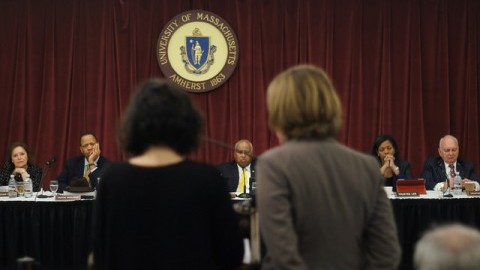 On Dec. 9, just two days shy of the close of the Paris climate talks, the University of Massachusetts Board of Trustees will meet, and the UMass community will be watching. Some students, faculty, staff and alumni expect the Board will vote to divest their endowment from the fossil fuel industry, thus removing their support of global climate disaster, exploitation and human suffering. For three years, the UMass Board of Trustees has failed to meet the demands of student and community activists for full divestment from the fossil fuel industry. The time for action is now. As people all over the world make a resounding call for bold commitments to climate justice from our world leaders in Paris, we look to the leaders of our university with the expectation that they too will not wait any longer to act for climate justice.

In the past few years, the world has woken up to the fact that there is more carbon in the fossil fuel industry’s reserves than humans can safely burn without triggering abrupt and catastrophic climate change. We have already seen the impacts of irresponsible carbon extraction and emission, and we have seen that they are felt first, and most violently, in poor and marginalized communities. By maintaining its investments in fossil fuel companies, our university is willingly betting against the public interest and in favor of the destruction of human lives, now and in the future that the university’s students will inherit.

With the support of students, graduate students, faculty, staff, and alumni on multiple UMass campuses, this campaign has done absolutely everything in its power to demonstrate the urgent moral imperative of divestment. We met with administrators, presented a five-year proposal for divestment from the top 200 fossil fuel companies, and demonstrated the UMass community’s overwhelming call for divestment through petitions, rallies, and public actions. In spite of the numerous administrative hurdles we have had to face, we are confident that the work done by students and the community has fully paved the way for the board to act immediately. Nothing stands in the way of a vote to divest unless our leaders’ priorities have been skewed by the powerful politics of fossil fuel interests.

In his first speech as new chairman of the board, Victor Woolridge emphasized taking courageous action, driven by “the fierce urgency of now,” citing Martin Luther King, Jr. King stated in 1963, “We are now faced with the fact that tomorrow is today. We are confronted with the fierce urgency of now. In this unfolding conundrum of life and history, there is such a thing as being too late. This is no time for apathy or complacency. This is a time for vigorous and positive action.” We know that President Meehan and Chairman Woolridge understand the importance of taking leadership in this moment, and acting with the moral courage that King demanded.

Now is a time for all of us to amplify the voices of people demanding climate justice in Paris, as well as those around the world who are unable to speak out, but need action more than anyone. We, UMass students and the community, have spoken up, and next week, we will watch University leaders with expectation and hope that they will take this vital step to stand on the right side of history, the side of humanity, and in opposition of this outdated and destructive industry.